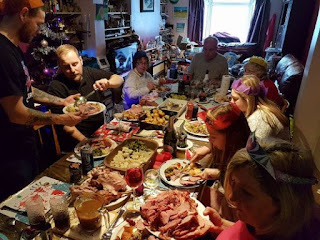 I’d not slept well on Sunday night; I was falling asleep yesterday at Glenn and Matt’s (I *hate* that!) and so I had an early night last night. I got an hour’s sleep until nice-next-door started having noisy sex.
Eventually they sated their base urges and I slept like a log. I woke, looked at the clock and distinctly remember seeing it was 7.27. I thought I’d had a few minutes more sleep, and after a few minutes I saw it was three o’clock. Was I dreaming previously? I must have been.
I went for a tiddle, and as I was in the loo I heard the most pitiful whimpering from Fudge. He wanted to go outside. I let him out, he shot up the garden like a bullet from a gun, barking and shouting as he went.
I finally got him back in and settled. I went back to bed where I lay coughing for two hours before giving up and getting up.
Again I’d spent much of the night wide awake, knowing full well that I will be fast asleep later when stuff is going on.

Over an early brekkie (five o’clock) I had a look at the Internet and saw all the spoilers for the TV shows that I had been intending to watch over the next few days. I wish people wouldn’t give spoilers about popular TV shows. Not everyone spends their holiday time staring continually at the telly. I have mentioned this to specific people who are particularly bad for this, and every time it just causes offence. I decided not to rattle any cages today, so (seething) I then spent an hour wrestling with a geo-puzzle. My trigonometry isn’t what it once was.

"er indoors TM" and the dogs got up, and we spent a couple of hours re-arranging the living room. I then took the dogs round the park (supposedly to wear them out). As we walked we met "My Boy TM" and Rolo. Together we wandered to where I’d left my car yesterday afternoon. The idea was that I would drive "My Boy TM"’s branch of the tribe back with me, but they weren’t quite ready so I came home without them.
Shortly after I got home "Daddy’s Little Angel TM", "Stormageddon - Bringer of Destruction TM" and Sam arrived. The first fruit of my loin and his womenfolk weren’t far behind, and my mummy and daddy were hot on their heels, together with mother-in-law.

Four generations of us (pestered by five dogs) sat down for a rather good Christmas dinner. "er indoors TM" did a rather good spread. We all scoffed ourselves silly. And (as predicted) I spent much of the afternoon fast asleep. But I did wake for Christmas pudding.
In retrospect we got too much food in. Three was *loads* left over, and we didn’t cook up the mushrooms or carrots, and the stout, cheese, stolen and Christmas cake went untouched. And perhaps eleven people (and five dogs) was just too many; there wasn’t space in the living room for us all.
But we had a rather good afternoon.

Despite having been told what was going to happen, once the family had departed we sat in front of the telly and watched the Christmas “Doctor Who”. Without wishing to give any spoilers (even though I’m in the minority on this), I liked the program; it catered for the die-hard fans of the show. But it did go on a bit. It could have been twenty minutes shorter, and if it had been it would have made for a better show.
We also saw the Christmas “Trollied”; that was rather good.

The plan was then to have “Dog Christmas”; the pups have received quite a few presents. We deliberately waited until after the family bash before opening their pressies as we didn’t want Sid, Rolo or Pogo making off with their stuff. But the afternoon had worn the pups out. They both spent the evening snoring.