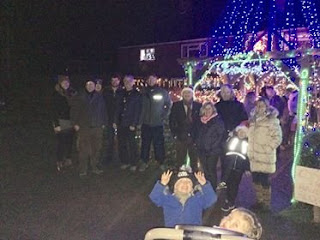 Yesterday I got the old table in from the shed. We shall need that on Boxing Day. Last night when I went for my 4am widdle I’d forgotten all about the old table and fell over it in the dark.
Oh, how I laughed.
I went back to bed. I dozed off once the pain had subsided.

I eventually got up, and when  I did I had words with my hounds. They were both circling by the back door, both clearly rather in need of a widdle. I opened the door for them and they sauntered outside. Treacle sniffed the planters I made over the summer, Fudge inspected the shed. It was a little while before either considered actually having the wazz they both so obviously needed.

Over brekkie I saw a new load of geocaches had gone live near Bedgebury. Billed as a series of ten caches I could only count nine. And I had another look at some of the puzzles that had me stumped yesterday. I remained stumped.

I then took the dogs for their morning constitutional. As we walked Fudge found half a baguette that someone had thrown away. He had it scoffed before I could get it out of his gob. Treacle also found something to eat that she shouldn’t have.
I made a point of walking behind Fudge and chivvied him along today, and consequently we got round the walk in half the time it usually takes. As we walked Treacle found a fluffy little puppy with whom she actually played (rather than running in terror). And she made friends with a small girl who is usually terrified of dogs, but who said that a dog called “Treacle” can’t be scary.
As we walked back across the co-op field my phone beeped. A new geocache had gone live a mile away.

We came home; I sparked up the lap-top and fiddled about for a bit. We had to go to Tesco anyway, and seeing the new cache hadn’t had a find logged yet we thought we might chase the First to Find. We did it; a rather tricky hide, but we were first there. Happy dance (!)
We went on to Tesco to get supplies for Boxing Day. The place was heaving, but the staff were helpful and friendly. I couldn’t help but compare the place with Aldi last Thursday where the staff couldn’t be arsed.

We had focaccia for lunch (!) and I puzzled a bit more. Armed with a rather huge bit of help from Gordon I solved one of the trickier puzzles I’ve got on my “to do” list. I then made quite a bit of headway into another – I’ve got a degree in maths; if only I could remember basic trigonometry.

We then set off for the traditional Christmas Eve relative-visiting. First of all to brother-in-law. We spent an hour or so catching up. Then on to father-in-law who was building a perpetual motion engine. I say “perpetual motion”; he has a plan for a gadget which hydrolyses water using electricity from solar panels, then recombines the resultant hydrogen and oxygen. Thus generating power and the water you first started with.
Sounds like a good idea.

We then went for a little walk. We went up to the New Inn hoping for a pint. We went in; the place was characterless. I can only describe it as being like a doctor’s waiting room. It was full of small children shrieking and the echoing cacophony was deafening. It wasn’t possible to get to the bar; it was being used as a table by locals jealously guarding their places. We turned round and came out.
We walked down the road to see the Westfield Lights. Every Christmas the people of the village of Westfield light up their houses. It is rather beautiful. And this evening there was a geo-meet to see the lights. It was good to catch up with some old friends.

On the way home we visited "My Boy TM"; he’d offered us some of their left-over gammon. We scoffed ourselves silly on their left-overs.
I shall have an early night; I’ve got an early start tomorrow…