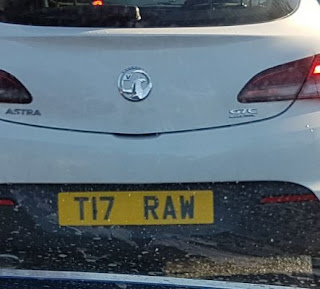 With no dogs barking at shadows and no neighbours doing the dirty deed I slept right through till 5am. Longer would have been nice, but the toilet was calling. I went back to bed and found that "er indoors TM" and the hounds had made themselves comfortable in the two minutes that I’d been gone. I then lay awake for two hours listening to the snoring.

Over brekkie I had a look at the Internet. Overnight I’d only had a couple of emails. They were from Amazon suggesting I might buy what I’d already bought from them. I did have a dozen notifications on Facebook with people liking various things I’d posted up. Perhaps I post too much onto that site? I looked round Facebook whilst I had the site on my lap-top. There wasn’t really anything much that had happened overnight.
However, there was quite a bit of consternation and indignation on some of the work-related pages I follow over the story in which President Trump is alleged to banned the Centre for Disease Control from using the words “Vulnerable”, “Entitlement”, “Diversity”, “Transgender”, “Fetus”, “Evidence-based”, “Science-based” in any of their reports or publications. *If* this were true it would be quite the news story. But thirty seconds on the Internet shows it’s all lies. It amazes me that these stories get such publicity when they are patently made up.

I took the dogs for a walk, and after five minutes I got rather impatient with Fudge. When we walk, Treacle stays close, Fudge does his own sweet thing. He *never* keeps up; he bimbles about fifty yards behind, and if he wants to turn round and run back the way we’ve just come, he does. I wasn’t having any of that today; he can keep up when he’s on the lead. He could keep up today. I walked behind him and herded him like a sheep. Apart from a run-in with OrangeHead it worked well.
Talking of OrangeHead I saw she was with a gang of other dog-walkers today, and because she was with a gang, she completely ignored me.

Once home I pootled for a bit. As I did so the dogs squabbled over their new rubber toys. I supervised their squabbling, but if it continues I shall throw the things away. Neither wants to actually play with the toy. Both want the other dog’s toy.
I settled the dogs and set off earlier than I needed to this morning. I drove toward town, realized I'd forgotten my wallet and came home again. Eventually I got into town and found somewhere to park. I wanted to talk to the tattoo artists in the town centre... On Saturday I went to get a golden compass tattoo-ed on my arm. I actually got a grey-shaded somewhat pissed life-belt.  But nil desperandum... the chaps in town can salvage something from it.

I set off up the motorway and hunted after a geoache I failed to find twice earlier in the year. I failed again. But as I was in the area I drove into Ditton and thought I'd hunt one out there. I found it; I say I found it... I found a tic-tac box (stuffed down the fittings of a power box) which was full of water and contained what looked like a soggy geo-log. I've claimed a find.
As I was finding the thing, Karl rang. He'd slipped out of work and had got the information I needed for the virtual pub crawl in London. Sterling chap !! There is a minor hiccup in that stage ten doesn’t seem to be a pub but a public garden.
That’s a bit of a nuisance…

It was lunch time, I was hungry... there was only one thing to do. McDinner. As I drove from McDonalds to work I found myself behind a car with the registration T17 RAW. I did snigger....

And then to work... What with night shifts and days off today was the first non-night shift I've done this month. Not  bad, really... It was a shame I had to do some work, but I suppose most people have to (from time to time)...
Posted by Manky Badger at 11:01 pm