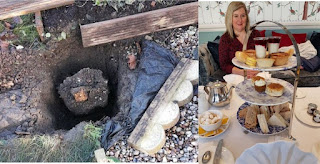 Having slept through the last two days (pre night shift) when I woke and saw the clock read 12.50 I was rather confused as to why it was so dark outside. It took me a few minutes to work out the difference between 12.50pm and 12.50am.
I dozed through toll about 5am, then lay awake struggling to breathe. I seem to have developed a cold.

Over brekkie Facebook was alive with the new Star Wars film. Last night’s midnight showing had proved rather popular. The last Star Wars film had a midnight showing, and by the next morning I knew all that happened and didn’t need to see the film. Much the same happened today.
I had thought about going to last night’s showing to avoid the spoilers, but I expect the tickets had sold out, I was feeling rather tired and… To be honest we watched the last Star Wars film last week. I wanted to turn it off half way through.
I had no emails worth mentioning today. I was hoping for one - I’m getting a little twitchy hoping for a notification about a new geocache. I like chasing the First to Finds, and in geo-circles there is kudos to be had for getting at least one every month. I’ve currently got six consecutive months with FTFs. I once managed twenty-three such months, However December is usually the end of these streaks. No one hides Tupperware under rocks in December.

"er indoors TM" and I took the dogs round the park for a little walk. I saw the Jehovah’s Witnesses were back at the Park Gates. Everyone moans about the JoBos coming door-to-door. The ones in Ashford are harmless enough; they have a stall by the Hubert fountain and just smile pleasantly at passers-by.
Our walk passed off uneventfully; we saw OrangeHead in the distance. Again she was alone. Whereas she was once the queen bee of the viccie park dog walking circuit, nowadays she seems to be on her own more and more.

With dogs walked I went into the garden; I had a plan to make a start and do some preparation for tomorrow’s planned fence repairs. My intention today was to clear the shingle from where we would be working. In the past this alone has been a serious task. Today I did it all in ten minutes. So, with time on my hands I thought I might expose one of the concrete blocks. What in the past has been two hours of digging took me forty minutes. And (to my amazement) once the soil was out I got a spade behind the concrete block, gave it a damn good heave and the thing fell forward. I can’t get it out of the hole on my own (as it weighs about twice as much as I do), but I’d achieved far more on my own than I thought possible. So in a spirit of gung-ho optimism I dug round the second concrete pillar and got that loose too. In two hours I achieved more than I’ve done in an entire day in the past. I think the recent rains having made the soil soft has helped a lot.
Flushed with success I decided to call a halt. Tomorrow is actually “fence day” for which I have the assistance of the first fruit of my loin. We have to remove the two concrete pillars from the holes, put in metposts and fence posts, repair the broken fence panel and replace three fence panels.
Sounds straightforward enough…

I had a shower and sat down for a cuppa, then found that after the morning’s exertions I couldn’t move. Eventually I heaved myself up. We settled the dogs, I put on the sexy new jacket I bought last Saturday and we went to Folkestone. We thought we might have afternoon tea as a pre-Xmas treat. "er indoors TM" had got a Groupon voucher for tea at the Best Western Clifton Hotel. We got there and were made very welcome; we had sofas and a little table by the fire, and we scoffed ourselves silly.
Have you ever had a formal afternoon tea? I can heartily recommend it. You get a bucket of tea or coffee (or prosecco or hot chocolate) with endless refills, and you swill that whilst devouring posh sandwiches and la-de-dar cakes until you feel sick. There’s some photos of what went on here. And (I still can’t believe it) we paid less than fourteen quid for the pair of us.

We came home (via a Church Micro) and realising we had far too may cakes that needed walking off, we tool the pups round the park again. Treacle nearly played with a beagle, and picked fights with a couple of other dogs. She’s getting braver.
With dogs walked I had a shower and sat on the sofa with Fudge feeling rather stuffed whilst "er indoors TM" put up the Christmas tree. Treacle “helped” her. I maintain the tree looks better for having been chewed.