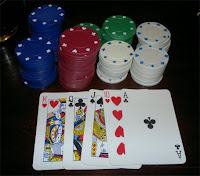 I was woken by the front door slamming rather noisily at 3.10am. So I went downstairs in case the worst had happened. Needless to say it was only the first fruit of my loin coming home quietly. He looked rather smart - he'd been to a casino (in Margate) to lose forty quid. I tried to hint that he could lose forty quid more constructively by giving it to me, but for all that my lad might be a bit daft, he ain't stupid.

Mind you, I wish he'd come home even more quietly: once I'm woken I have terrible trouble getting back to sleep again, and having exchanged insults with him and having had a quick tiddle, I then lay in bed until 9.30am.

Yesterday I mentioned that I was in a sulk at work. I was doubly sulking today. Having thought that I was on an early start, I found out yesterday (at almost the last minute) that I'd been reassigned to the late shift. I don't mind the late start because I go to work in daylight, but the later lunch break (2pm at the earliest) is too late for comfort, and the last few hours of the day do seem to drag.
I really don't like the way we have a seemingly random shift allocation. I would far rather do a week of late shifts rather than have an odd late midweek after which I do not get home before 9pm, and know I have to be out of bed at 6am the next morning.

And being on a sudden late shift really stuffed my plans for the evening. I'd been invited to a game of poker, and I missed the first half hour. Mind you, despite turning up late, I still managed to win. I did the victory dance to celebrate....