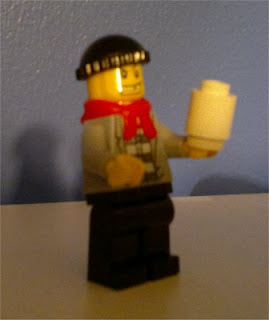 My sniffle’s got worse – yesterday I went to bed a couple of hours earlier than usual and slept right through almost until till alarm clock time. I was tempted to phone in sick this morning, but in the end I decided that I didn’t dare.

Coming home from work was quite tricky – it had been raining all day, and the roads I drove along were more like rivers. I came home to find the world in uproar over yesterday’s strikes. No one seems at all bothered about the burning issues that were causing the controversy – instead the world was up in arms about what Jeremy Clarkson had said on the matter. Personally I think a lot of people might have missed the point here. Jeremy Clarkson isn’t the villain of the piece. He was clearly dragged onto peak time television to say something controversial in order to boost the ratings.
And in doing what was expected of him, he’s effectively (to coin a phrase) pissed on his own chips. Silly fellow.

And it’s December – and so I opened my Lego Advent Calendar. Today we start off with a tramp. Normally we would have something more festive – a reindeer, a snowman, but in these austere times, a tramp is all the market will stand.
Mind you, someone’s been foolish enough to give Harry Ramp the price of a cup of tea. He spent it on Brasso, but I suppose he’s happy. And being happy is the name of the game, really….