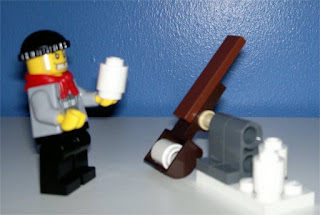 My sniffle’s now developed into full-blown sinusitis. I’ve had this before and it dragged on for months. So I made the most of one of the only advantages of working in a hospital by going to see the resident G.P. (hospitals have them now).
Before I could see the quack I had my blood pressure checked – 134 / 84. The last time I had this done it was 130 / 88. It would seem I’ve lowered my first number at the expense of the second number. I wonder what the numbers actually mean?
But I found this wonderful chart on the Internet which says my blood pressure is “high normal”. That’s good enough for me - I can live with “high normal”.

And despite dying to death of disease, I spent the evening doing the ironing and sorting out the smalls. These long winter evenings just fly by….

Meanwhile in another (possibly better) plane of reality, Harry Ramp has found a Brasso Shovel (patent pending).
There are those, admittedly those who don’t drink Brasso, who would think that the device is actually some kind of catapult for launching tins of Brasso. But, as Harry would ask, why on Earth would anyone get rid of Brasso.
The logic is inescapable….