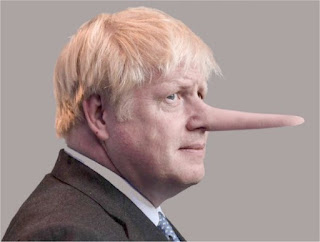 Well, the votes have been counted. Whilst it is hardly a resounding success, the Prime Minister lives to tell another lie... Two hundred and eleven Conservative MPs voted to say they had confidence in Boris Johnson, and so they have no problem with his track record....

Personally I have a problem with his track record. He's not averse to telling a porky, is he?

I find myself asking if the MPs who voted in his favour really do have confidence in him, or if they think he is as guilty as a puppy sitting by a pile of poo still see him being better than any possible successor.

Either possibility is a sad state of affairs..
Posted by Manky Badger at 8:59 pm