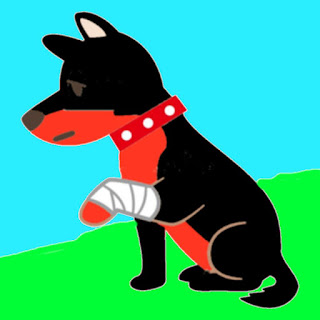 I slept like a log again, which was something of a result. I came downstairs to find “er indoors TM”  in the garden with he dogs. Morgan was still walking awkwardly, but with a very waggly tail. He came inside, quite happily crapped on the carpet then he and Bailey had a fight on the sofa next to me as I scoffed toast and peered into the Internet. It was still there, and was rather dull this morning

I took the big dogs round the park for a walk. I’ve gone off Viccie Park recently – it seems to be the domain of those who never let their dogs off of the lead and who judge those who do. But we had a good walk even if Pogo did shout at one or two other dogs.

And with walk walked I came home, settled the big dogs and took Morgan to the vet. Perhaps I was over-reacting but I worry about the silly dogs, and Morgan has been limping for two days now.

The receptionist gave Morgan a good fussing, then the vet gave him the once-over. She agreed with me in that she said she would be very surprised if anything was broken; he’s probably sprained something and needs to rest. He’s been prescribed pain killers.

We came home, all dogs had a mad five minutes in the garden, and on smelling something unsavoury I emptied the puppies bedding into the toilet and put the cushion cover into the washing machine. The mad five minutes had taken its toll, and all pups were soon asleep.

With dogs settled I drove off in the general direction of work. The traffic was going oh-so-slowly. Eventually I saw the cause - there was a funeral cortege being led by a horse-drawn carriage. Eventually I got past it on the dual carriageway, but as I drove off I could see where they were going... up the A20 to the crematorium five miles away. I suppose that having a horse drawn carriage looks the business at a funeral, but it really does hold up the traffic and bring the town to a standstill.

I might leave instructions for one of those when my time comes.

Pausing only briefly to check out the parking for tomorrow's planned walk I thought I might get McDonalds for dinner. But only thought about it. The traffic was queuing out of the car park. So I went up to Sainsburys for lunch. Oh, the traffic was heaving there as well. Why were all the normal people out in force today?

Work was work, and with it done I was rather pleased to see that I could go home at fifty miles per hour down the motorway (as opposed to the thirty miles per hour I did yesterday). And once home I was met by four very over-excited dogs. Morgan certainly isn’t slowing down… He needs to.