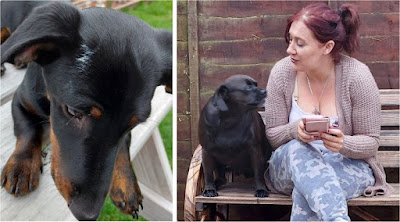 I slept well last night; finally waking after nine hours asleep. The puppies were still asleep when I got up; I took them round the garden where they did that which was expected of them, then they bothered the big dogs for five minutes. The puppies absolutely love and adore Treacle and Pogo. Treacle and Pogo (at best) tolerate the babies.

The plan for today was to move one of the dressers out and paint behind it. The thing was wedged tightly in place so we asked “My Boy TM” to help move it. We got a message to say he was on the way far earlier than expected, so there was a panic-stricken five minutes spent tidying up before he arrived, but I don’t think we passed inspection.
In any event it turned out we’d wasted his time; what with the new door frame having been put in, it isn’t possible to get the dresser out from under the stairs without destroying it. \We conceded that we would have to paint around it (or “er indoors TM” would).

I hung out some washing, and as “er indoors TM” painted round the dresser (and over Morgan’s head) I tried to solve geo-puzzles in the vicinity of where we are going on holiday. I managed to get green lights from the checkers for five of them, but some remained beyond my ability. If any of my loyal readers know what the letters F, P, K, H, S, O, C, B, N or I might mean in relation to the name "Dmitrij" or how to knit in German I’d love to know.

“Daddy’s Little Angel TM” arrived with Darcie Waa Waa. I got a cuddle or two with the baby; she had been asleep pretty much all the time yesterday and I’d not wanted to wake her. Big Jake was having an interview on the other side of town. Once he was interviewed he joined us, and we had a rather good bit of dinner, before I drove them home.

I had planned to iron shirts at some point today… maybe tomorrow evening?