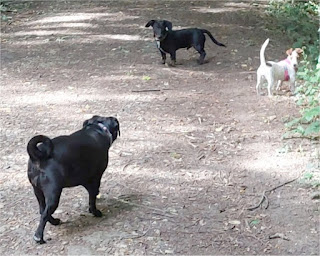 I woke to find the backache hadn't abated overnight. I hobbled downstairs and chivvied the puppies into the garden where they did their things, then jumped onto the sofa and fought a pitched battle as I watched an episode of "Orange is the New Black" before getting ready for work.

Leaving “er indoors TM” with three sleeping dogs I drove off to work with a sense of "do I have do?" Five years ago I used to feel physically sick at the prospect of going to work. Now I don't mind going to work - I'd just rather not.

As I drove the pundits on the radio were talking about the ongoing war in Ukraine. There was supposedly some summit meeting of world leaders today which had been called as the rest of  the world is realising that fighting a war (if only by proxy) is expensive, and the western alliance is acting surprised that the Russians have taken most the Ukrainian grain they've captured as the spoils of war, and what little is left can’t be exported as al the Ukrainian harbours are blockaded (as if we didn't see that coming).

One of many things which annoys me about the morning news is that so much of it is predictable. If the Russians invade one of the world's leading producers of grain, there's going to be food shortages. Isn't there (!)

I got to work and checked my emails. A few weeks ago “Daddy’s Little Angel TM”  took Darcie Waa Waa to the local hospital. There were no working computers in the paediatric A&E that day so she got taken to the ward to be examined. The registrar seeing her said this IT failure was a regular occurrence and asked us to put in a formal complaint to hopefully prompt their management to sort the problem.

This morning (six weeks later) that hospital's head honcho emailed me to say there was no IT issue, and even if there had been it was now sorted. She went on to imply that the registrar who said we should complain has had a formal arse-kicking and he won't speak out of turn again (if he knows what’s good for him).

And managers at this hospital wonder why it has such a reputation of having a bullying culture...

Did I ever mention I’m glad I don’t work there any more?

I did my bit at work; being on an early shift meant an early finish, and I got to take the dogs to the woods. Treacle was as good as gold; the puppies are still works in progress.

My back still hurts…
Posted by Manky Badger at 9:44 pm