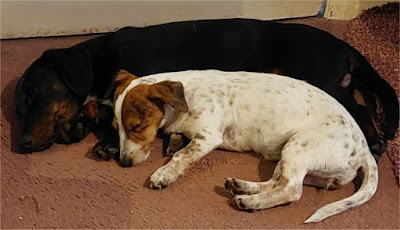 No matter how tired I am after a night shift I rarely sleep more that three hours when I come home from one. Last night was much the same. I got to bed at twenty past five and was still up and about shortly after nine o’clock.

I had brekkie (which I had to make myself rather than help myself to whatever had been put out for me) then did my unpacking. I say “unpacking”; I emptied my suitcase into the laundry basket and fed a load of T-shirts to the washing machine before getting dressed. And then I remembered something. Over the last year or so I’ve chucked out pairs of undercrackers as they have thrown in the sponge, but haven’t got any new ones, so I’m quite short of the things. I’d taken all but one of my pairs of undercrackers with me on holiday. Perhaps I shouldn’t have put those shirts in?

And being back to reality it was time to get the dogs. We drove up to Sittingbourne where Karl and Tracey have been looking after Pogo and Treacle (under Charlotte’s supervision). Whist we were there we had a nosey at their new kitchen. To my untutored eye it didn’t look that different to ours.

From there it was to “Daddy’s Little Angel TM” to swap Pogo for the puppies. Pogo is her dog, he’s only been with us temporarily, and today was time for him to go home. Pausing only briefly to shut Bailey’s paw in the boot door we were soon home, and on the way to being back to usual.

I’ve had a really good holiday, but I’ve missed the dogs. Collecting dogs, washing undercrackers, and catching up on a week’s worth of diary writing took most of the day today…
Posted by Manky Badger at 10:41 pm