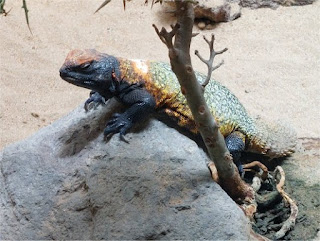 I looked into looked into our hotel room’s fridge with something of a sense of dismay this morning. The thing was still full with bottles of water which we’d bought before discovering the tap water was safe to drink.

I spent a few minutes taking photos of the hotel, then following a three course brekkie we bundled ourselves into a taxi and set off to Palmitos Park – a local zoo. We’d heard good reports of the place and we weren’t disappointed. It turned out a bus went there from right outside the hotel, but for four of us a taxi was cheaper (and quicker too…)

We arrived and probably spent as much time admiring the beautiful mountain scenery as we did the animals. We sat in baking sunshine for the birds of prey show. It was amazing. As part of the show they set two eagles off flying. The idea was they would be back for the end of the show; they didn’t come back. We could see them circling overhead an hour after the show had finished.

I must admit I was rather dubious about going to the dolphin show bearing in mind many countries have banned them, but the dolphins seemed to be very well cared for and seemed to be enjoying what they were doing.

I did chuckle in the gift shop – a brat had been told it couldn’t have any more money wasted on it, and was having a total melt-down. As the four-year-old screamed “I’ve always wanted a dolphin diary” the poor father suddenly realised we could understand.

I took a few photos today… over a hundred.

We’d been told the park would keep us occupied for about four hours; It was closer to five. We taxi-ed back to the hotel where I had a swim. Having had a swim I wasn’t wearing glasses or bandanna, and the barman commented “Ah – Senor Mojito – where are the glasses and headscarf?” Headscarf? – Pah!

We went back to the hotel room where I found my watch and phone hadn’t charged up. It would seem that taking my key card out of the slot turns off all the power including that doing the charging. Woops.

As “er indoors TM” had a shower I stood on our balcony and watched the antics of the brats below. One chap had gone to the smoking area with a toddler and a child in a push chair. The child in the push chair ran off so the toddler seized the push chair, charged at the smaller child, ran it over, then threw it (screaming) into the push chair. Meanwhile the chap supposedly with them just stared into space puffing his fag.

After a late dinner we went to watch the evening’s entertainment. Some traditional Spanish Dancing was going on… it was rather dire. We went inside and played cards for a bit then went and sat on our adjacent balconies.

The two girls on the other side of “My Boy TM” and Cheryl’s room had been given a bottle of champagne and didn’t like the stuff. Did we have bottles of cold water with which we could do a swap. They got some of our excess water bottles; we got their champagne.

I think it fair to say they got the better part of that deal.
Posted by Manky Badger at 5:33 pm