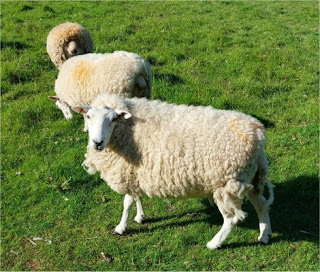 I got fed up with laying awake. I rolled over and looked at the clock. Finding myself wide awake about three hours earlier than I’d intended to be I got up, tiddled the puppies, then went out on my own. Some of my geocaches along the Greensand Way had “Did Not Find” logs on them. I’d had some snarky messages from someone who couldn’t find them earlier in the week (found five thousand geocaches; hidden none!) so I thought I’d waste a couple of hours sorting them out before “er indoors TM” got up. Usually I would take the dogs on a geo-walk, but these caches were in fields full of sheep. And not just any sheep. These are sheep that don’t have the sense to clear off, but come up to say hello to dogs and then get in a panic when the dogs go bat-shit mental about seeing a sheep.

Dogs can be hard work at the top end of the Godinton estate.

I drove out and parked in my usual spot where I park to check on these caches. I had eight to check as I walked. Some had been there all along. On in particular boils my piss. It is a film pot behind a fence post. You can see it from yards away (well, I can!) but so many people say they can’t find it when it *is* there.

Four others were missing which I soon replaced. It was a shame that the furthest was a mile from the car. It was a bigger shame that no one could have done the decent thing and sorted out the issue as they walked past. Anyone could have done in thirty seconds that which I spent two hours doing today, but (as is the case with pretty much everything in life) there are those who give to the hobby of finding film pots under rocks, and those who take from it.

As I walked I was amazed at how many other people were out and about walking and jogging a mile from civilisation before eight o’clock on a Bank Holiday.

As I drove home the pundits on the radio were talking about the ongoing Jubilee celebrations. There was an interview with the Archbishop of York… A live interview. I suspect (hope!) if it had been pre-recorded it would never have been broadcast. Rather than describing the Queen as a much-loved grandmother of the nation, he seemed to paint a picture of her as some religious crackpot hermit living in splendid isolation. Someone in authority really needs to be taking the Archbishop to one side and asking “WTF are you talking about”.

I stopped off on my way home to replace another missing geocache of mine. With that one sorted I now have “not there” reports on four of my two hundred and nineteen currently active caches. Two are on a series in Hemsted Forest that I intend to archive on my next week off, one I’m intending to sort on my way to work this evening and one I’ll do when I get a minute…

Once home I hung out washing, and pretty much wasted the morning between writing up CPD and fighting with frankly insoluble geo-puzzles. Have you ever heard of Ook code?

I went to bed for the afternoon and slept on and off for four hours. I woke to an empty house.  “er indoors TM” had taken the hounds out somewhere. By looking on Facebook I saw that somewhere was the Warren.

I’m now off to the night shift… I’m not sure how I wound up with it. I’m sure I didn’t volunteer for it as it effectively stuffs up two Bank Holiday days. Oh well…

Things could always be worse… but today was effectively a waste of a day.
Posted by Manky Badger at 5:35 pm