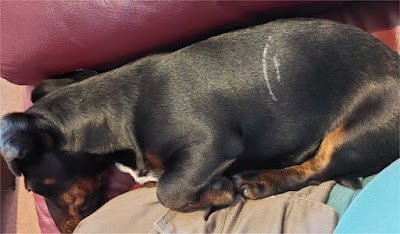 Yesterday I mentioned that I'd volunteered (at short notice) to take on last night's night shift and ended by speculating on whether or not doing so had been a good idea.  I didn't have the best of nights. In fact I think it fair to say that last night was a classic example of the veracity of the two hundred and eighty fifth Rule of Acquisition: "No good deed ever goes unpunished."

As I drove home there was still more talk on the radio about the ongoing war in Ukraine. What is it all about? Surely the Russian President didn’t wake up one morning and think “I’m bored… let’s do something… I know – invade Ukraine”.

The Russians invaded in support of the Donetsk People's Republic and the Luhansk People's Republic; two parts of Ukraine in which a proportion of the population want to break free and form their own countries. I can’t pretend to be an expert on the matter, but this made me wonder about Northern Ireland and Scotland. Both of those countries have large amounts of the population who would like to leave the United Kingdom and be their own state. Is the UK situation that different to that in the Ukraine? I don’t know, but given the precedent, how long will it be before the Russians are freeing the Scots and the Irish from English oppression?

I came home to find that while I’d been at work, “er indoors TM” had been painting. Painting Morgan judging by the look of him.

I had a shave, and rather then going to bed I had this idea that I might sleep on the sofa with all four dogs (like I did last weekend after the night shift). I got maybe an hour’s sleep, but the big dogs kept whinging to go upstairs, and when they finally shut up so a humungous fly (the size of a pterodactyl) started buzzing round the room.

I had this idea that a walk might tire the dogs so we went to Orlestone Woods. Morgan seems to like the walks and Bailey is slowly getting less clingy.

About three quarters of our way round as we approached a crossroads I could see some chap with another dog coming from the right. I stopped so he could go past without incident. He saw the puppies who were ten yards ahead of me, deliberately turned in their direction and announced that his dog would have them if they didn’t look out. Before I could say anything Pogo and Treacle appeared from whatever hedge they’d been rummaging in. This bloke took one look at them, said “it’s like that, is it?” and all but ran in the opposite direction. For all that Pogo and Treacle are a pug / cocker spaniel cross (rather soppy breeds), the thug element has often mistaken them for small rottweilers. A useful mistake to have some people making.

It was only a shame that Treacle was (again) covered in fox shit.

As I drove home I found myself wishing. There’s a lot about me I’m not overly happy about and would like to change. I’d like a lot more money. I’d like to be a little less flippant and a little more mature. I’d like not to be fat. I’d like not to be bald. But if I could only change just one thing, I would get rid of my idiot magnet. Wherever I go I attract idiots just like today’s one.

Once home Treacle had a good scrubbing (much to her disgust) and I wasted far too long trying to solve a geo-puzzle about shoe sizes and knitting socks. If any of my loyal readers could come up with an answer to this one, I’d be grateful.

Feeling rather knackered I spent the afternoon on the sofa (underneath the dogs) watching episodes of “Orange is the New Black” until “er indoors TM” came home. I really should have done something today… mowed the lawn, done washing, got the hoover out… I had a little kip, walked the dogs and watched telly. But as I said yesterday I’d rather have done a night shift than two late shifts.