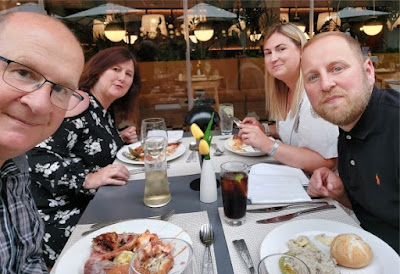 Another bad night’s sleep. Having obviously spent a fortune on the hotel you would think the owners might have spent less on the pretentious paintings on all the walls and used the savings on getting decent mattresses, wouldn’t you?

Being wide awake I took our towels up to the Over-18s pool at half past even and found a load of people had already had the same idea. But I managed to snag a few sunloungers for us.

We went into brekkie and my piss boiled as I watched the parents pandering to the brats. One child was entirely focussed on a computer tablet complete with headphones whilst mother poked food into his mouth, and the child then barked some serious abuse at mother; apparently she was feeding him the wrong scraps.

With brekkie scoffed we went up to the pool, and I spent an entertaining half-hour listening to a chap who was putting on such a show of being camp as he shouted into his phone. He seemed to be calling everyone he knew to shout at them that he was on holiday. The most interesting conversation was with Jade with whom he was rather upset. Firstly because she couldn’t come to some party he was staging, and secondly because she too had recently had a blood test the results of which would seem to have been worse than the results of his blood test.

Cheryl was feeling under the weather today; “er indoors TM” and “My Boy TM” were content laying in the sun. Laying in the sun not moving was hurting my back, so I went off on my own for a little walk. Before we’d left home I’d been asked if I wouldn’t mind replacing a missing geocache which was a mile and a quarter from the hotel. That doesn’t sound far, does it? So I looked at the map and planned a little geo-mission for myself.

My first target was a geocache which would never be allowed here in Kent – hidden in a public amphitheatre.

The second was one I found but couldn’t prise out of the post into which it was wedged.

The third was one I gave up on. With hint “under bridge” I could hear a radio playing under a bridge. Looking under I saw tables, chairs, sleeping bags and an entire encampment of tramps in residence. I didn’t hang about.

The fourth target was the one I’d been asked to replace… another which wouldn’t be allowed here in Kent seemingly in a private car park.

My last was randomly stuffed in a hedge.

As I walked I found an open-air market and loads of feral cats. I got to nosey at the houses in which the locals lived. But by the time I’d got to my fifth find I was flagging. I took pot luck and hailed a passing taxi. Five minutes and three euros later I was back at the hotel.

I made my way back to the pool, and the barman who only two days ago had called me “Senor Mojito” had seemingly upgraded me to “Capitan Mojito” which I saw as something of a result. So I lived up to my sobriquet whilst watching the spotty young lad who was obviously sniffing round the bikini-clad young ladies. Seemingly everyone but him knew the young ladies were there on their honeymoon.

Rather than going to the restaurant for dinner we’d booked a table in the on-site Italian restaurant. We had a rather good dinner together with a bottle of one of the best red wines I’ve had in a very long time.

I took a few photos as I went here and there today.

I really should do some packing… we’re off home tomorrow.