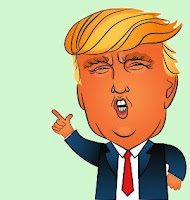 "er indoors TM" woke me as she came to bed at 1.20am, and I then lay awake from most of the rest of the night. I dozed fitfully, but never for longer than twenty minutes. I gave up trying to sleep and was up shortly after 5am.
As I scoffed toast I watched the documentary about a mock SAS training camp. Whilst it was very interesting there is no way I would want to go through that training. And they swore a lot too. This made me think; I swear too much. Must stop that.

I set off to work through the torrential rain. Yesterday morning at the same time I was setting up my fishing gear on a beautiful morning. What a difference a day makes.
As I drove to work the pundits on the radio were speculating on the results of the American Presidential elections, and just as I got to work the result was announced. Social media then filled up with all sorts of doom and gloom. Mind you it would have done regardless of whoever won. One candidate was alleged to be guilty of all sorts of misdemeanours; the other was seen to be a looney. Both got to be candidates for the most powerful position on the planet only because they could afford it. I suppose the director of the FBI announcing a major investigation into the conduct of one of the candidates a week before the election has had a major bearing on the result. Mind you the winner does seem not to mince his words – the public are often taken in by off-the-cuff brash promises.
Will Mr Trump be as bad as everyone thinks he will be? Time will tell. It always does.

I stopped off at Morrisons for some fruit. They had their Christmas decorations up already. If there was any other supermarket that hadn't got their decorations up I would have gone there instead as a protest. But I expect they are all in full Christmas spirit.
As I shopped I saw the new "Dad's Army" film was available on DVD. I bought a copy. Yesterday on Facebook I'd seen postings that Clive Dunn (who played Corporal Jones) had died. I thought he'd died years ago. He had. He died three years ago. I wonder why people were posting about his death yesterday?

I had a rather busy day at work but an early start made for an early finish. However an early finish means I get to Ashford for the rush-hour traffic. I got home, collected "Furry Face TM" then drove round to collect "Daddy’s Little Angel TM" and then drove all the way back through the rush hour traffic. For some inexplicable reason my dog had to meet her new puppy. And the puppy currently resides at the far side of town.
"er indoors TM" showed up “chez puppy” and I took "Furry Face TM" for a walk and left them to it.
That was an hour and a half ago…