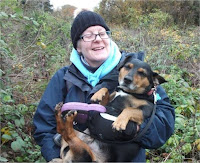 I slept well after having done two night shifts; I was licked awake by "Furry Face TM" just after 7am. Having woken me he wagged his tail and then went back to sleep. I wish I could have done.
Over brekkie my cousin was having a rant on Facebook about something she’d seen on the telly.  She was incensed that potentially life-saving treatments were not available on the NHS. I don’t know the specific details of the one shs was so cross about, but some of these treatments not available on the NHS don’t actually work. I can remember the outrage in the 1970s when the people of Hastings raised thousands of pounds to send a young boy (who went on to be best man at my wedding) to Switzerland for treatment to stop him going blind? It didn’t work for him, and it has since been proved this treatment was a scam and didn’t work at all. But this didn’t stop people all around the world raising loads of money and sending children to a quack who was running a rather cosy little racket in a very scenic mountain location.
Quite a few of the treatments not available on the NHS don’t actually work. That’s why they aren’t available on the NHS.

I popped the lead onto my little dog and we set off to Kings Hill. We took a little longer to get there than we might have done. There is something fundamentally wrong with Google Navigation. Whilst it is excellent at knowing which roads are busy and which are not at a given moment, it has no idea when roads are closed for weeks at a time. But we weren’t *too* late in meeting up with Gordon and Aleta.
We had a rather good walk along paths which were well marked. We did take a little aside to our route at one point and it was there that we found the utterly impassable footpaths. And it did rain a little heavier that I’d been expecting. But all things considered a walk round the golf course with good company wasn’t too bad a way to spend the morning.
Geocache-wise it was a good walk; we found all our targets. We had a minor hiccup with the field puzzle; had we listened to what we’d been told and walked the route backwards things might have been a lot easier for us.

After two hours we found ourselves back at the car. I was amazed at how few photos I’d actually taken today. We said our goodbyes, and it wasn’t long before we were home. Once I’d hosed the mud off of my dog I popped up to the corner shop where I rescued the nice people who run the shop from a drunk. He was getting rather aggressive because they didn’t sell “Texan” bars. I told him they’d sold out, and he seemed happy and staggered off. He seemed to be oblivious to the fact that Nestle stopped making them thirty years ago.

I scoffed my sandwich whilst watching an episode of “Game of Thrones”. As I watched it my wet dog snuggled up to me. He burped a few times before falling asleep. I then spent a couple of hours doing on-line corporate inductions for my new job at Maidstone & Tunbridge Wells Health Authority (did I mention I got the job I applied for?). It turned out I wasted that time as my computer didn’t save the work I’d done. Oh well… do it again.

"er indoors TM" came home early and boiled up a rather good bit of steak for dinner. Probably a few too many calories, but having decided to cut out the extraneous rubbish I so often shove down my neck gave me a few calories to spare in my allowance.
This calorie counting amazes me. I walked off less calories in the morning’s walk than I would get from four hob-nob biccies…