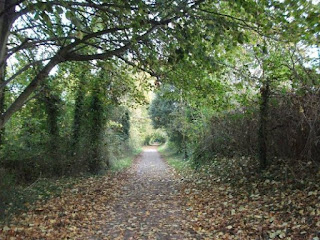 The plan was not to stay drinking in Folkestone for *too* long yesterday because I didn’t want to leave my little dog alone with fireworks going off. I think I may have stayed out just a tad longer that I had planned to. I can remember there being talk of a train and all of a sudden it was far-too-late o’clock and the guard on the train was waking me up and telling me we were at Charing Cross. Charing Cross!
The journey home was spent in the company of two rather nice young ladies (who had legs all the way up to their bums) who were even more drunk than I was. They blamed prosecco. I kept up a running commentary of my movements on Facebook; it seemed to amuse the world.
I was glad to get home; it was a shame it was about seven hours later than planned. I say “about”; in all honesty I have no idea what time I got home. It was all rather vague.

I woke before 6am feeling remarkably well; even if my innards were making odd noises. As they gurgled I pootled about on the Internet. There seemed to be very few piccies from people at fireworks events last night. Did no one do fireworks? I put together a Facebook event for the next astro club meeting, and tried to chivvy up a few more speakers for next year. I then started advertising the next astro club meeting but hit a snag. One of the websites that no one ever reads (Total Ashford) has gone west, but I got free adverts in other websites that no one ever reads.
I shall plug the club in the Facebook groups nearer the time.
As I pootled both fruits of my loin phoned to tell me off.

"er indoors TM" got up some four hours after I had. I *hate* this insomnia. I have no trouble nodding off at the most inopportune times (like when on the train home) but when I *want* to sleep (like when in bed at 5am) I am wide awake.
Normally on a Sunday we’d be off on a planned walk somewhere but with the possibility of mum being discharged from hospital today we’d kept our options open. As it turned out mum wasn’t coming home and others were visiting her today, so we thought a walk up the canal at Hythe might be a good idea.

We put the lead onto a rather over-excited little dog and drove down to West Hythe. I’d had a look on the geo-map and had found a series of six geocaches along the canal with one or two others on the way. We arrived to find the car park was full. We parked on the edge of the car park; no one gave us a parking ticket.
We had a rather good walk along the canal. "Furry Face TM" had a good run; we walked slower and found half a dozen caches.

I took a few photos whilst we walked. Once home I posted them on-line and "er indoors TM" did up the last of the pumpkin soup as a late lunch. I then slobbed in front of the telly for several hours.
I think I might still be drunk…