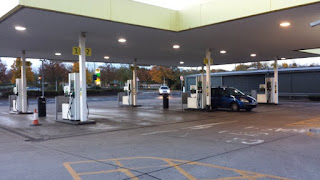 I hadn't been asleep long when my dog jumped on the bed and started walking all over me. That did it for the night's sleep. I dozed on and off; finally giving up trying to sleep shortly before 5.30am.
Not much had happened on-line overnight (which was probably just as well) so I took the opportunity to get a little bit ahead with the dog psychology course. Today I learned all sorts of things about how dogs actually do understand hundreds of words, and the games you can play with your own dog to prove this claim. As I learned, my very own test subject was snuggling up to me in the hope of getting toast. He is not the ideal test subject as I am convinced he understands me perfectly but often chooses to ignore me. I've shown this by the fact that when I call him when he's misbehaving he will often carry on what he is doing, but his tail will wag on hearing his name. I wonder if I can devise any more experiments to prove his recalcitrance.
I then let him into the garden to do his business. He came back inside looking very guilty. I wonder what he's done.

And so to work. Winter has arrived; I had to scrape ice off of my car for the first time this winter today. As I drove the radio spewed its usual drivel. Controversy rages as to exactly who will pay the bill for the much-needed renovation at Buckingham Palace.

It strikes me that the answer is clear-cut. If the palace is used for state functions then the state should pay. If it is open to the public then the entrance fees fund the work. If it is the Queen's private residence then she should foot the bill.   But if Her Majesty is expected to shell out no one should then be surprised if the Queen refuses to pay, cuts her losses and sells the place. (wouldn't that cause upset). Meanwhile science might have found aliens (again) and the legal battles over Britain's leaving the EU continue to rage.
Surely the legal questions of leaving the EU should have been sorted out *before* the decision was even considered?

Once I'd had a quick voom round Morrisons I got some petrol. And something happened at the petrol station which had never happened to me before. I was the only customer there. Not another car. It looked weird. Equally weird was the fact that the Esso garage less than a minute's drive up the road was charging five pence more per litre of petrol. It certainly pays to shop around.

I got to work for a 7.45am start, and did my thing. I probably spent too long looking out of the window at a glorious day. I don't mind working at weekends when I don't think I'm missing anything; I'm not too keen on it when the weather is good though. The weather started good, but I came home through torrential rain.
The weather is supposed to get worse overnight…