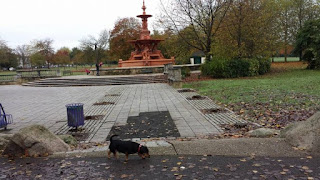 Over brekkie I looked at my Facebook feed. It was still stuffed full with all sorts of rants about Donald Trump and the American Presidential election. Far more so than there ever has been about any British referendum or election. I then went through my friends list to see exactly who was posting this stuff. I have two American Facebook-friends. Two. I counted them. They weren’t posting much; neither were the Australian, Polish or Romanian people on the list. It was only the British ones who were being vocal.
Meanwhile yesterday’s horrific accident in Croydon goes pretty much un-noticed. Why don’t people get worked up over things which *are* something to do with them?
Whilst I had the Facebook-friends list up I went through it and removed the people I don’t actually know. Who are Stacey Scott and Doug Yeomans anyway?
I then looked at my emails. I had a job offer. Not the one I’m waiting for, but one which made me think. I’ve been offered a job on a cruise liner as a guest lecturer. I’d get more money that I get now for sailing around all sorts of exotic locations. Whilst at the locations I get to play tourist; whilst on the high seas I get to spout to the masses on a range of subjects. I know a thing or two about blood, snakes, astronomy, fishing… maybe I might just consider it.

I popped the lead onto "Furry Face TM" and we went for or usual short walk round the park. For once it passed off relatively uneventfully. As we walked we passed within a few feet of a squirrel on a couple of occasions. My dog didn’t notice the tree-rat at all. Sometimes he is not the most observant of dogs.
As we walked the nice men from the council were working around the park. I say “nice men from the council”; their vans all had logos for “Aspire Landscape Management”. I assumed this was some private company but it turns out I was right. Aspire Landscape Management is what any other council would call the “Parks and Gardens Department”. It is the branch of the council which does parks and gardens. I can’t help but wonder how much time and money they wasted coming up with the corporate name and logo. I must admit they do a *very* good job in Viccie Park, but what does the daft name achieve?

Once home my little dog had his brekkie, and I had a look at my printer. When I went to print off some astro club stuff the other day it wasn’t working. This morning there was nothing wrong with it. Odd.
I picked up the house phone; I was intending to phone Brighton Health Authority (or whatever daft name it operates under) to have a whinge to find we had a message on the 1571 thingy. Ruth Creedy wanted me to phone her about Alfie. I phoned her back and suggested she phoned the vet.

I then set off to work. As I'd fiddled with my printer I found a few astro club bank statements Woops! I drove them round to Sarah and popped them through the letterbox then went on to Fat Fish Tackle in Chartham; I needed a few more bits and bobs of fishing tackle. Swivels are always useful, and I got a couple of floats and some carp rigs and assorted stuff.
As I shopped I was very conscious of a loud-mouthed idiot who was pontificating noisily to the world in general with his opinions on everything piscatorial as he stood at the till. He'd obviously long since paid for his shopping but was just standing in everyone's way giving the assembled throng the benefit of his (so-called) wisdom. He thought this lake was good and that bait was bad, and it was clear that if he thought something was true then it must be true. I probably spent fifteen minutes looking at the stuff in the shop, and this twit was loudly rattling on the whole time despite the fact clearly no one was actually listening to him. As luck would have it he left just as I was about to pay for my stuff. As I walked to the till one of the chaps behind the till turned to the other and said "Thank F... he's gone". I innocently remarked to one of the assistants that I though the loud-mouthed twit was his friend; he fell about laughing.
Mind you it has been my experience that every fishing tackle shop has one such bore. Perhaps they wait in fishing tackle shops until the pubs open?

I drove on to Morrisons for petrol, and got to work with a minute to spare. I had thought about getting coffee and cake on my way to work; I was right not to have done so.

The rest of the day was rather dull…