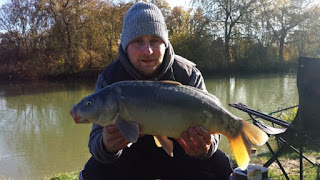 The last day of my little long weekend; I was wide awake cuddling my dog at 4am. After a while I gave up trying to sleep. Over brekkie I finished this week’s instalment of the dog psychology course. It seems that whilst dogs are wonderful at communicating with humans, their closest relations (the wolves) are nowhere near so good. Wolves are on a par with the great apes. Have dogs evolved to communicate where wolves have not? Is that the secret of their success? I don’t know, but I completed this week’s work and scored one hundred per cent in this week’s test.
I felt rather pleased about that.

I had expected the car to be covered in ice; I was pleased to find it wasn’t. But it was still minus one degree when I collected "My Boy TM" at 6.30am. We went to McDonalds for McBreakfast, and with that scoffed we arrived at Shirkoak lake just as it was getting light. Bearing in mind our success the other week we thought we’d have another day’s fishing.

The fishing started slowly; mind you it was *cold*. But as the day warmed up so the fishing picked up. Both of us were kept busy for much of the day. "My Boy TM" was only using one rod as he maintains it is easier to keep an eye on just one rod rather than two. I was using two rods and proved him right. There were several times when I had rather big fish on both rods, and a couple of times when we had fish on all three rods at the same time.
We had been intending to have a day tiddler bashing; very few tiddlers were caught. But I lost count of how many times I needed to use the landing net. We must have had over fifty respectable carp between us. Although the fish we were catching weren’t huge, they were on average between two to four pounds in weight which isn’t bad when your average catch is only a couple of ounces. (Real fishermen weigh in pounds and ounces. Never weigh a fish in kilogrammes; you’ll only embarrass yourself). The biggest of the day (not caught by me) came in at nine pounds, and pulled “like a banshee on crack” (!)
The owner of the pond came round; we chatted for a bit as his dogs tried to eat our baits.
As we fished I took a few photos and even made a little video of Dan’s piscatorial excellence.

Ideally we would have stayed longer, but we knew that sunset was at a quarter past four. And by half past three it was getting rather cold.
We came home; I dropped "My Boy TM" home. He was late for dinner (!) Once I’d unpacked my fishing gear I walked "Furry Face TM" round the block. As we walked up Francis Road I saw that one house had already got their Christmas decorations up. Bonfire night was only three days ago and they are now Christmassing. Can you believe it?

With our walk done I ran round doing the Hoovering (with a Dyson) and managed to clout my knee against the doorframe. That *really* hurt. As I was still seeing stars my phone rang. "Daddy’s Little Angel TM" was ranting about what a rip-off the TV license is. I told her to pay up and shut her ratlle; I might have been a tad more sympathetic had I not been counting into how many pieces my kneecap had just been shattered.
I hobbled to the sofa where I sat for a while. I don’t think I’ve done any lasting damage to the knee; it just hurts. As it throbbed I had an email. A few days ago I re-wrote one of my wherigos for a chap who lives in Devon. It has now gone live. I’m quite pleased about that.

Being Tuesday the clans gathered – tonight at our house. We had a good catch-up. And Bernie joined us. It was so good – whenever I’ve seen him recently he’s always been in a ruch for work. It was so good to catch up.
Must do that more often…