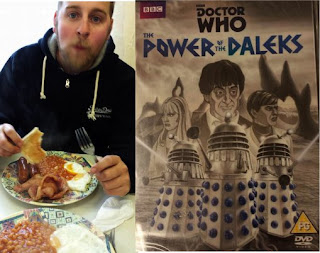 One of the most obvious things about me is that I’m a fat bloke. I hate it. I’ve been fat pretty much all my life, and have always been jealous of those who can neck the pies without a second thought. Periodically I try to do something about it. Over brekkie I had a weigh-in. I’ve been on a diet for a week, and I’ve lost half a stone. This weight loss thing is *really* easy; you just don’t eat. I’ve been constantly hungry for a week, and I’ve lost weight. Simples.
I find that making a written note of what I eat on myfitnesspal dot com helps. It knows how many calories I can have per day, and says how many calories there are in what I’m eating. And because I am really anal about keeping the food diary it makes me realise just how many calories there are in bars of chocolate and bags of crisps and stuff. And so I stop eating them.
The flip side is that I am constantly hungry. So much so that it hurts. Mind you this is probably why I am so fat; if I am not stuffed to the point of being bloated I am hungry. I’m trying to convince myself that the feeling of hunger is actually the feeling of weight loss. Between 2011 and 2013 I lost nearly six stones by being constantly hungry for two years.
Those who don’t have a weight problem tell me this is a bad way to lose weight. They are probably right but over the years I’ve tried every weight loss plan imaginable. None of them work for me. Being hungry all the time does.

Over brekkie (toast and coffee, 297 calories) I checked my emails. StatCounter had its weekly report on who had been looking at my other blog. I am legally required to provide evidence of how I keep myself up to date in professional matters so I write a little blog about work-related stuff. Other people have folders of random papers; for me a blog works. You can see the thing here (but be warned – it is dull).
It never fails to amaze me just how many people read that blog. It is hardly riveting.
Mind you neither is this, but seventy-eight people tuned in yesterday. Seventy-eight !!!

I then had a look on Facebook. I have an invite to go tree-climbing in a few weeks’ time. Much as I quite like clambering, my weight (coupled with a dodgy right elbow) doesn’t make it easy. Perhaps by then there will be substantially less of me to heave up a tree.
Not much else of note had been posted overnight.

Having just worked all weekend meant I now have a couple of days off. The plan for today had been a day’s fishing, but yesterday’s storm had made everywhere waterlogged, and a second instalment of the storm was forecast for mid-day, so fishing got postponed until another time.
Instead I drove round to collect my angling buddy, and me and "My Boy TM" went for a little drive. First of all we had a look round “World of Water” to get some ideas for garden pond-type stuff. And whilst we were there we popped into Lilly’s Café for a spot of brekkie. I have this theory that if I occasionally shove in a load of calories it fools my metabolism. Lilly’s Café is a rather scary-looking place, but the fry-up was good. Nine hundred calories good.

From here we drove down to Hastings to see my mum. She’s looking better after her recent heart surgery. We stayed there for a couple of hours; sorting out her new phone whilst we were there. Her phone isn’t difficult to work; she just seems to be determined not to be able to work it.

The plan was to come home via the Koi shop in Guestling but the place doesn’t open on Mondays, so we drove past it. We stopped off at Tesco. "My Boy TM" got the makings of dinner; I got the Doctor Who DVD “The Power of the Daleks”; first broadcast fifty years ago the episodes have long since been lost, but they’ve re-created it in animation form.
I took the first fruit of my loin home and then walked "Furry Face TM" round the park. The heavy rain of earlier had abated, and the sun was out as we walked. Our walk was rather uneventful; it has been like that for the last few walks. Probably for the best.

Once home my dog made short work of the treat I’d bought him in Tesco and I put on my new DVD. I watched four episodes before I had t go out. First of all to Steve and Sarah’s to shift a fridge, a dishwasher and a washing machine. And then to collect "Daddy’s Little Angel TM", drive her half way across town to collect a disassembled bunk bed and take the stuff back to her flat.
By the time I got to watch “Game of Thrones” over some tea I was worn out…