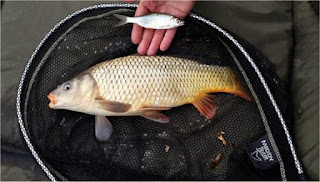 After a night of rather vivid and disturbing dreams I was rather grateful when "er indoors TM"s alarm went off. I was slightly less grateful that it was 5.30am though. She’d arranged to go on a day trip to Bruges. I could have gone. I would have liked to have been to Bruges, but to be honest the coach trip there and back was somewhat off-putting. Endless hours on a coach drives me mad, so I’d decided not to go. Also I’d been under the misapprehension that it was a girlie thing…
I wish I had signed up for it now.

I drove her up to the pick-up point then drove round to collect "My Boy TM" and we went fishing. We got to Shirkoak lake ten minutes after the gate was supposed to be unlocked (which was only ten minutes before the gate was actually unlocked).
We set up just as dawn was breaking, and were soon fishing. Fishing was rather slow today. And cold. After an hour or so a car pulled up in the car park and a chap got out. He slowly wandered round the pond, he chatted with us as he came past. He tried to impress us by pretending to be looking for where he thought the carp were lurking. If he was really as keen on fishing as he would have had us believe, then he would have been at the lake an hour earlier than he was.
Shortly after that another pair arrived. They had a rather large trolley on which they carried all of their gear and they made great show of setting up their camp. It was fun to watch them; one chap in bright yellow Hi-Vis jacket had clearly never been fishing before as his mate was having to do everything for him and to constantly shout instructions. However this mate seemed to be spending a lot of his time making endless cups of tea. We could hear the whistle of the boiling kettle going off every five minutes.

I took a few photos whilst we fished. Today was probably the quietest fishing session we’ve had all year. And it was COLD. Despite this we had a rather good time; we watched a kingfisher catching tiddlers and we saw a deer in the next field. But it was a shame that rain stopped play about an hour earlier than we’d intended to pack up.

As we drove home the rain stopped. I got to walk "Furry Face TM" round the park before it got dark. And once home I had a shower and finally started to get warm. Despite the cold of today I’d caught the sun and I sat in front of the telly with hands and feet like blocks of ice but with a glowing face.
I watched two episodes of “Game of Thrones” and an old episode of “Gladiators”. I’m hoping to get the David Attenborough planet Earth documentary watched and the National Geographic program about Mars watched before "er indoors TM" gets home.
Wonder if she got me a pressie…