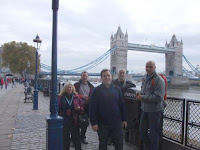 I woke in desperate need of the loo at 3.20am, and was finally nodding off again when "Furry Face TM" jumped on me at 4am. I lay awake for a while before giving up on sleep and watching “The Secret Diary of a Call Girl” which the SkyPlus box had decided to record for me. I’ve a vague plan to upgrade to a SkyQ box but I’m not sure if I can transfer over all the rubbish I’ve recorded from one box to the other.

The plan for today had involved going caving in bath, but this wasn’t happening. So rather than suling about what might have been we went to London. Regular readers of this drivel may recall I organised a virtual geo-ghost hunt in London earlier in the year. I organised another today. Unfortunately today wasn’t a convenient day for most people, but six of us had a go at the “Catastrophe, Calamity, Cataclysm” series of geocaches. We met up underneath a railway bridge over the river Thames. Narrowly avoiding plummeting to my doom we then went up to the Monument.
Have you ever been to the Monument? It is about a squillion miles high and has perhaps the longest spiral staircase I’ve ever struggled with. Mind you the views were rather good. We admired them whilst our hearts pounded and our legs quivered.

From the Monument we walked past HMS Belfast and the Tower of London and on to the old Royal Mint. At this point I was glad to have people along who knew London. For the next hour or so we wandered around places I’d only ever heard about on a Monopoly board. We spent a few moments doing what might best be described as geology homework, and then as the rain started we thought we’d take a little break. A pint of ale and a plate of chips were very welcome, but by the time we’d finished what was drizzle had become heavy rain.

We had intended to walk from wherever it was that we were to Piccadilly. But instead we thought we’d take the tube. Totally failing to find Fenchurch Street tube station (has it got one?) we got the tube from Tower bridge to the Embankment and walked.
Before long we’d found our final known target and with all the information needed to solve the puzzle (I’d blagged it a week ago at home!) we got on the tube again. I won’t say where we took the tube to because that might be a spoiler. However where we thought would be the closest tube station was actually a mile and a half from where we needed to be. So we got back onto the train and went a stop or two down the line.
We still had quite a bit of walking to do, but eventually we found the final part of the “Catastrophe, Calamity, Cataclysm” series. Happy dance.

We would have carried on caching, but the rain was persistent so we made our way to the nearest tube station, and on to Charing Cross where we all said our goodbyes.
We were home shortly after 6pm; rather earlier than I’d expected. The rain in London had been bad; the rain in Ashford was torrential. There had been talk of fireworks; the rain put paid to that…
I took a few photos whilst we were out. I put those on-line then we had an evening on front of the telly.
Posted by Manky Badger at 10:13 pm