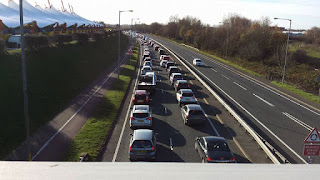 On Tuesday I went for a little geo-stroll with some friends. For a week or so before we'd been tearing our hair out about a rather tricky geo-puzzle. From the position of the icon on the map we thought we might be passing near it, but we couldn't solve the puzzle.
I posted some photos of our walk on Tuesday, and last night whilst at work I got a message that the chap who'd set that puzzle cache had seen my photos, and that we'd walked right past it. In fact, I'd taken one of my photos whilst almost standing on the thing.
That's what I like about geocaching; you have no idea that the things are there.

Also whilst I worked there was mention on the radio about the fascination that the British public have with Nazi Germany. Did you know there are people who collect spoons made by the third Reich? You can buy books about the subject on Amazon.

I came home, and it wasn’t long before "Daddy’s Little Angel TM" and "Stormageddon - Bringer of Destruction TM" and Sam arrived to help me with the broken fence panel. "Stormageddon - Bringer of Destruction TM" caused mayhem by nearly falling in the garden pond, but after a little messing about we get the new fence panel in place. I then walked home with them; it gave "Furry Face TM" a walk. And it gave me some company. Much as I like the time off that goes with the night shifts, doing the night shifts can be rather lonely.
As we walked home I couldn’t believe the queues of traffic waiting to get into the designer outlet village. It is probably one of the most popular shopping destinations in the South East; I think the place is rather over-rated. But that didn’t stop the traffic queuing in all directions to get there.

And then I went to bed for a bit… Four hours later I got up and over a late brekkie I watched last night’s episode of “The Young Pope”. I’m still not entirely sure what is going on, and for a program about the Catholic Church it has far too many tits. But it makes for entertaining viewing.

A quick McDonalds (too many calories) then it was time for this month’s astro club. Attendance was noticeably down this time. Possibly due to the talk – personally I was fascinated by the lecture on gravitational waves, but I can see that some people mind find if off-putting. For myself I find the attitude of one of our members somewhat off-putting. Having disagreed with her on a matter of some triviality some years ago she now makes a point of blanking me whenever she sees me, and has ordered her husband to do the same. Several people have commented on this. It is getting rather tiresome now…