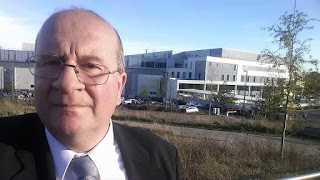 My little dog had a nightmare shortly after 4am; his fidgeting and whimpering woke me. I settled him and he was soon fast asleep again. Unlike me though. I gave up trying to sleep and got up shortly after 5am. I watched this week’s episode of “Dad’s Army” in which Private Fraser was found to have a hoard of gold sovereigns. It passed half an hour, but again the episode’s ending was rather weak.

I then had a look-see on the Internet. I had an email to tell me that my Apple ID had been disabled for security reasons. I wasn’t especially worried; I don’t have an Apple ID. But if I wanted to verify my Apple account (that I don’t have) they suggested I went to somewhere on albertsonshomecenter.com. That seems to be a timber merchant somewhere in California. I wonder if their website has also been hacked?
The blatant opportunism of these cyber-crooks amazes me. I suppose enough people must fall for their scams for them to bother continuing.

I set off to work; it was *cold* this morning. As I drove the radio boiled my piss. As it does. Apparently there are new rules as to what dangerous chemicals are allowed in school chemistry laboratories. And schools with blacklisted chemicals have to get the bomb disposal squads to come and blow them up. What really wound me up was the attitude of the presenter on the radio. As with anything scientific or technical the chap *always* tries to make the thing into a joke in a painfully transparent attempt to cover up his own ignorance.

I got to work; I did what I had to, and at lunchtime I made a quick getaway. I had some time owing.
I stopped off in Wincheap; the pet shop there sells fishing tackle. That is another supplier of fishing tackle which I’ve been unwittingly driving past for five years. Yesterday I whinged about the prices of reels. Today I got a rather good reel for fifteen quid. I shall test it out soon.
I then drove on to the hospital at Pembury where I had a job interview. Do I want to leave my current job? Not really; but I do feel I’m capable of doing more. Do I want to work at Pembury? I don’t know. I got there and the interview didn’t so much focus on what the job is about as on the paperwork that goes behind it. So my wishes may well turn out to be academic. Perhaps posting a selfie outside the place was a tad premature?

I came home and walked my little dog round the block. If I don’t take him out the very moment I get home he gets very over-excited and fractious. And with him walked I then got to have a look at the parcel which had been delivered. Last Wednesday I ordered a pair of trousers from eBay. I asked for 42 inch short – they sent 36 inch regular. I’ve emailed them to say I’m sending them back. We shall see what happens…