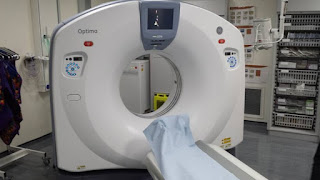 I slept quite well last night. So did my little dog who spent the night in his basket. He seems to spend the night in his basket after we’ve been out for a longer walk. Perhaps he’s getting old?
Over brekkie (coffee, toast and jam, 297 calories, 15% of the day’s allowance) I had a look-see on-line. I had emails for the astro club advertising the Thursford Christmas Spectacular, from GPS tracking offering us the ability to track all our vehicles with GPS devices, and one from Gerald Yusuf who wanted to book accommodation in January. Somehow the email address has been picked up by a spambot.

I then drove out to Maidstone; I had an appointment with the human resources people at the hospital there. All sorts of paperwork to sort out before I can take up my new position with them.
I then went to the local hospital for a CT scan of my sinuses. Now to wait for an appointment to get the operation done. Mind you I can see this not happening. The specialist assured me it would be done as a day case; now they are talking about having to stay in hospital overnight. And they want me to take two weeks off work after the operation. That won’t happen with the new job on the horizon. And bearing in mind the polyps grew back last time I am beginning to question the logic of having it done again.

I came home. As I pulled up I could hear my dog barking. He doesn’t bark excessively when I’m about the house or in the garden; I’m pretty sure he recognises my car. I took him round the park where he nearly caught a squirrel. Had he kept quiet he would have caught it, but he rather spoiled his chances by barking at the poor creature.
I then organised a little geo-walk for next week, then had a cuppa whilst watching a bit of telly. I watched last night’s episode of “The Young Pope”. An odd show – I always thought Popes were supposed to be religious.

Jimbo arrived; we went to the gorge where we met Steve, Sarah and Stevey. After a rather good bit of dinner we slowly made our way to Downe House (sixty miles away) where the astro club was staging an observing evening for the paying punters. They’d all paid thirty quid a head and it was rather cloudy. But after an hour’s cloudgazing we gave them one or two PowerPoint shows.
It was a rather good evening… for the punters. Much as I didn’t dislike the evening I don’t think I really contributed much…