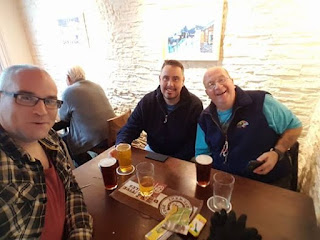 I slept well last night – yesterday was a good day but had been rather tiring. Over brekkie I finished off this week’s work on my dog psychology course and did the end of week quiz. I got full marks. On hundred per cent. I was pleased about that.
So, flushed with success at my score and also still on a buzz over yesterday’s day out I had a look at the geo-map. The chap who’s set the geo-walk we did yesterday (and the rainbow series we did earlier in the year) had also set a walk round London based on Sherlock Holmes. Whilst the puzzles involved are supposed to be solved as you walk around, it is much easier on the day to have blagged the puzzles before you go out. That way all you have to do when out is to get the photos. The day is quite long enough with all the walking not to need to be puzzle-solving too. The Sherlock Holmes series has seven puzzles to solve; I have answers for four so far.
If any of my loyal readers know when new drains were fitted to Great Scotland Yard or is going near the Temple Church in Fleet Street…

My laptop then flashed up something in the status bar. Urgent attention was needed. Suspecting the worst I had a look-see only to find two messages. One was suggesting I buy more hardware from the people who made my lap-top so I can connect the device to other stuff I don’t have. That notification has been disabled. The other was about some feature of Microsoft Edge. Who uses Microsoft Edge?

I took "Furry Face TM" out for a walk. There was a little incident when he tried to attack a bus. He ran between my legs and as I went arse over tit I accidently trod on his foot making him yelp. I actually once broke a dog’s foot by treading on it as it ran underneath me, and with that in mind my dog got told off. He was rather subdued for the rest of the walk.
We got to the park and found the Saturday morning joggers out in force. Probably a couple of hundred people jogging; all looking miserable. One young lad was crying as his mother forced him to run. As we walked I met a friend pushing her baby in a push chair. She was off to town and told me how she’d just been sworn at by someone in a yellow hi-vis jacket who was marshalling the joggers. He felt that people should know better than to bring push chairs into the park when the joggers are there.
We also met OrangeHead. I say “met”; she was with her gang, and when with her gang she has an attitude. She looked at me with utter contempt. The next time I meet her she will be all smiles.

We came home where "er indoors TM" was making herself some pumpkin soup. It smelled nice; I was fobbed off with a hot cross bun. With that scoffed I made my way to the train station. The journey to Folkestone was interesting; I spent it listening to some twit droning on about his get-rich-quick scheme. He has this plan to somehow generate free electricity from sunlight in the deserts but he then ranted that it wouldn’t work because it is too cloudy in Folkestone and told me that he was buying a house in Cheriton Avenue where he would be starting his business. Even though there isn’t enough sunlight in Folkestone, his plan would be a winner because he wouldn’t have to pay any tax because sunlight is free (!)
I was glad when the train stopped.

I met Jimbo and we had a decent bit of brekkie in the Bridge café. From there we went on to the Firkin where we met my Ham Street Lover and had a few pints including one of rhubarb cider. Rhubarb cider - can you believe it!! We also discovered the wonders of Facebook live and transmitted to a waiting universe. I think the universe seemed to like what it saw.
Things were rather hazy when Emma joined us at the Pullman. There was talk of going to Kipps, and I can distinctly remember planning to get on a train…