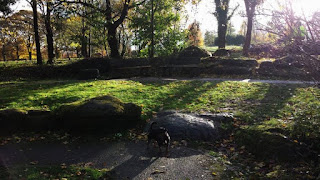 I was glad when the day shift arrived at work this morning. I like working at night; the work can be varied, I feel I am actually doing something worthwhile by actively contributing to patient care when the rest of the world sleeps, but being a lone worker is so lonely. I left work quite a while later then I probably might have done because it was such a novelty to have someone to talk to.

I got home just as "er indoors TM" was leaving home. She pulled off just as I drove up. I was surprised not to be greeted by an excited dog when I got in. "Furry Face TM" was in his basket and was fast asleep. He looked at me (bleary-eyed) and heaved himself up. I couldn’t disappoint him, so we went for a little walk.
We did our standard “round the park” walk; as we went up Beaver Road my dog picked a fight with a bus and then with a motorbike and a gang of workmen.
We had something of a surprise in the park; the nice people from “Aspire Landscape Management” had been working on the Chinese garden. The Chinese garden is a rather pretty secluded corner of the park. But because of its seclusion it is an ideal place for the local drug dealers to do their thing undisturbed. Or it has been up till now. The chaps from “Aspire Landscape Management” have removed all the shrubbery and hedging and opened the area up. It looks rather good.

With walk done I took myself off to bed. I set my alarm, but didn’t need to. I woke shortly after mid day. Over some toast I watched the last episode of the documentary about a mock SAS training school. I liked the show, but I must admit I never warmed to the lead instructor. He swore too much. Having been watching him over the last few weeks has made me conscious that I too swear too much.

I then did more of my course on dog psychology. How on Earth did mankind’s worst enemy (wolves) become our best friend (dogs). It turns out that there is a lot of evidence to suggest this was through a process of natural selection in which the more sociable wolves effectively domesticated themselves.
As I learned all sorts of things my very own domesticated wolf snored on the sofa next to me; intermittently farting. I can’t help but wonder if dogs would have become so popular if the early ones farted as badly as my one does. I completed this week’s lectures and got full marks. I’m a swot!

I then dozed off in front of the telly…