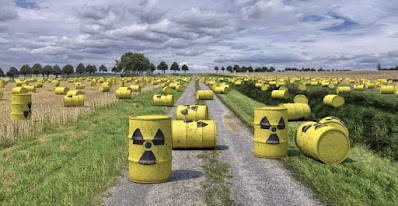 In a novel break with tradition I had granola for brekkie rather than toast as I watched an episode of “Fresh Meat” and as yet another negative COVID test incubated.

I sparked up my lap-top to record the negative result, saw absolutely nothing at all had happened on-line overnight, and got ready for yet another early shift.

As I drove to work the pundits on the radio were doing the "Farming Today" program. A show which has the potential to be very interesting but is often incredibly dull. In between talk of growing clover in with wheat (no - I have no idea why either) there was talk of the disposal of nuclear waste. Apparently over the next hundred years the UK looks set to generate just over five million tons of nuclear waste and some bright spark has come up with the bright idea of getting robots to shift it... on account of it is bloody dangerous stuff and no one wants to go near it.

I suppose that this then begs the question of who *do* they get who is daft enough to shift the stuff at the moment? And exactly where are they sticking it?

I wish I knew how you get the job of being one of these bright sparks. I would love to be paid good money for pointing out the blatantly obvious.

Meanwhile the Hubble Space Telescope is poggered. It has done well to last for thirty-one years.

I got to work and started on my sixth consecutive early shift. This was the fifth Saturday I've worked out of the last seven (the two I didn't work were when I was having a little holiday). For all that I grumble, I quite like working at the weekends really. There is something satisfying about being trusted to get the job done without needing to be watched like a hawk.

As I worked the weather went from torrential rain to glorious sunshine back to torrential rain. When I came hoe the sky was very black, and rain was intermittent as I came back down the motorway. Not wanting to chance the weather I decided against going to the family fun day that “My Boy TM” and Cheryl had organised. Instead I slobbed about at home. Having worked for six days I think I might have overdone it somewhat.

With a frankly awful day forecast for tomorrow I shall have a lie-in in the morning.