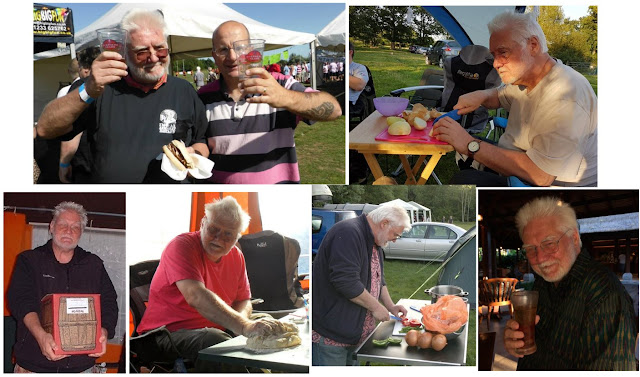 As I drove home so my phone pinged with the worst news. A good friend had passed away.
I first met Terry… Probably about twenty years ago. I don’t know exactly when but “er indoors TM” can remember the first time we met. We were camping at Brighton Kite Festival. Terry and Irene had set their camp just up the hill from us, and came to say hello.

It wasn’t long before we soon realized we had a mutual interest in drinking beer and camping. Both of us liked to camp, and both of us despised roughing it in a tent. It was his influence that soon transformed a few rough tents into a luxurious home from home.
It was through Terry that coffee at camp soon became filter coffee in cafetieres rather than instant (and they take some washing up!) And it wasn’t just the coffee. Terry would prepare so many treats for us from the raw ingredients. Bread for example – Terry would make and bake bread whilst at camp, Baking bread can be something like hard work – Terry did it in a tent.
And the drinks cabinet that he brought along to camp was impressive, to say the least. Ice, fruit, mixers…

The oldest photo I can find of us together was at Bat-Camp in 2005. Bat-Camp was a special thing in our lives – only open to a select few and by invitation only. Terry would clearly have been a firm friend long before 2005. Terry and Irene would both cook the meal on the first night at Bat-Camp, and they would always arrive with loads and loads of the most amazing curries.

I was always rather vague as to exactly what he did for a living. He worked for the Foreign Office, and both he and Irene would disappear overseas for work for many months at a time. When he was home we would try to meet up when we could, but the distance was something of a problem. I suppose only meeting infrequently meant that I treasured the times we did meet. We would meet at Bat-Camp, and at kite festivals and at beer festivals. Birthday parties and duck races. Pub crawls round Maidstone and Deal and Canterbury and Folkestone. We would meet up in London from time to time. I can remember being utterly in his hands as we took a succession of red London buses from heaven-only-knows to I-have-no-idea when trying to get to the Tower of London. And I can remember drinking far too much with him as we sheltered from the rain on a very memorable walk in the footsteps of Jack the Ripper.

Terry and Irene would often be back in the country for early February for trips to Dover Beer Festival when the snacks he brought along had to be seen to be believed. When people in other groups had a few bags of crisps, Terry would bring along a huge bag with pork pies and olives and cheeses which we ate off of plates with knives and forks. I can distinctly remember trying to find a stout that he might like at those festivals – just like me he liked a beer, but unlike me he didn’t like the black beers.

When coming back to the UK Terry would often bring us little pressies. I have quite a few very special bandannas that he gave me. And one of my geocaching trackables carries a little beadwork crocodile that Terry gave me. For some time many of us had little friendship bands that he tied to our wrists – they were to stay in place until they fell off naturally. Mine only lasted a few days, but “er indoors TM”’s stayed on her arm for several months.

I knew he had been poorly – he told me of the start of his troubles when we were drinking to excess in the Maison Dieu in Dover in 2019, but what with the pandemic and lockdowns and stuff we rather lost touch over the last year… which in retrospect probably allowed him to keep his troubles quiet. That was probably how he would have wanted it.

I had the message that he was very ill just over two weeks ago, and I was able to pop up to see him. He was extremely positive as we chatted. I had hoped to see him last week, but the doctor was visiting. I had a vague idea to see him last night before the night shift, but I’d heard he’ taken a turn for the worse.

I shall miss Terry. We’re having a curry this evening as we remember him. With dahl – he introduced us to that stuff.
I’ve heard that quite a few people are doing the same…