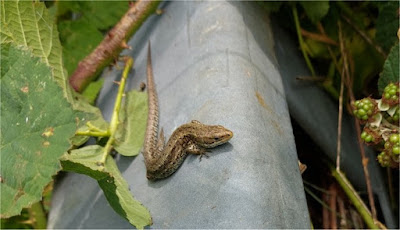 With no need to be up at silly o’clock I had hoped for a decent night’s sleep, and (as always) God laughs when we make plans. Pogo decided to growl at the curtains tapping against the window frame in the small hours, and “er indoors TM” told him off. Several times. Someone’s car alarm went off for over an hour. When that finally stopped, new-next-door’s son turned up outside (at five o’clock) shouting that he’d lost his keys. “er indoors TM” and dogs had snoring fits, and there were three separate thunderstorms between seven and eight o’clock.

I eventually dozed off, and woke shortly before nine o’clock.

As I scoffed brekkie I saw a new geocache had appeared on the route we’d be taking when we went to see Dad. There was a puzzle to solve before you would know where to look. After ten minutes of brain strain I gave up. Not so much because I couldn’t solve the puzzle as because I had no idea what the puzzle was.

We drove down to see Dad.

We arrived to find a skip in his front garden. Over the last few weeks he’s taken down his greenhouse. For years he loved his greenhouse – now it has gone. We also arrived to find all the Christmas decoration boxes out. Over the years mum had accumulated loads of really pretty Christmas ornaments, and Dad wanted rid of most of them. We’ve taken some. He seems to be clearing out pretty much everything.

We had a cuppa and cake with Dad, and another cuppa and more cake, then popped round to see mother-in-law. She seemed well after her spell in hospital having fallen off of a ladder.

As we drove home I had a stroke of genius. I still had no idea how to solve that geo-puzzle but I had an inkling of where that new geocache might be. To cut a long story short it wasn’t where I thought it might be, but as I was leaning on a crash barrier and peering inside so I saw movement by my hand. I’d put my hand right next to a little lizard who obligingly stayed still long enough for me to take a photo.

We came home and I ran the lawn mower over the lawn until “er indoors TM”’s parcel arrived, then we drove out to the Warren where we met Cheryl and Rolo and we had a good (if relatively short) walk. It was a shame that Rolo (a yorkie-chihuahua cross) picked and won a fight with a Great Dane. I say “shame”; it was something of a result really. A result for Rolo in that not only did he win, but he didn’t get eaten alive either.

With walk walked we came home. “er indoors TM” wanted to go up to the co-op field for Munzee reasons. I didn’t. perhaps I should have done? She was not at all happy with Pogo when she came home; Pogo had found a foul ditch and I’m not sure whether the black slime or the foul smell took longest to scrub off of him.

With dinner scoffed “er indoors TM” set off to the Saturday film night and I stayed home and ironed shirts whilst watching more episodes of “Fresh Meat”.

It has been a rather busy day today. It wasn’t a bad day, but I’m not happy. The BBC’s weather forecast had been crystal clear on the subject all week long. Today was going to be endless rain. The rain actually stopped at eight o’clock this morning. Again we were wrong to have cancelled plans. That’s another day of my life that the BBC’s frankly abysmal attempts at weather forecasting have spoiled.

Someone at the BBC’s weather forecasting department needs to be sacked. No one else is allowed to be anywhere near as crap at the job that they do as weather forecasters demonstrably are...
Posted by Manky Badger at 10:14 pm