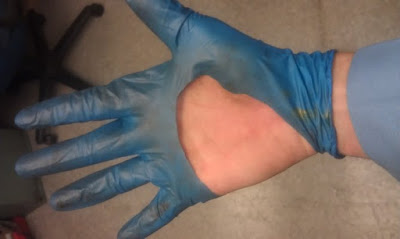 It was marginally cooler last night than it had been the night before. But only marginally. Having a hot dog snuggling up for much of the night didn’t help.

I made toast and watched an episode of “Fresh Meat” in which our heroes were supposedly “doing the dirty deed” but were obviously not as they still had their pants on. However during this bout of unmorality one porked the other with such vigour, enthusiasm and ferocity that she snapped her associate’s banjo string (apparently it’s a thing). I can’t help but think that if they’d removed their undercrackers then they might have had a less traumatic session, but what do I know?

I had a little look at the internet where there were some squabbles kicking off. There was quite a good argument on one of the pond-related group on Facebook. Some people’s ponds were attracting mosquitos which were then biting them. There was a theory being banded about that people who eat copious quantities of marmite don’t get bitted by mozzies. Those who adhere to this idea wouldn’t hear a word against it. Those who eat copious quantities of marmite but still get bitten by mozzies said that it didn’t work. You would think that in light of evidence proving that it doesn’t work the theory would have been abandoned, wouldn’t you? But those who believed in it (despite not eating marmite themselves) clung to it religiously.

I popped to the co-op on my way to work to get a bag of crisps. I don't usually use the self-service checkouts, but I did this morning. As I struggled with the machine, the chap using the other one made the observation that he too doesn't like the things, but he prefers the self-service checkouts to the infection-spreading old and tatty gloves being worn by the woman on the till.

Rather than going up what passes for a motorway in these "Operation Brock" times I headed westwards to Pembury. As I drove the pundits on the radio were talking about the Prime Minister's ex-adviser Dominic Cummings. Having been sacked after quite a bit of scandal, he's agreed to give an interview in which he looks to have dished a *lot* of dirt on the Prime Minister.

Making all sorts of nasty claims aren't going to hurt the Prime Minister, are they? The masses love Boris, and anything which paints him as a maverick and a bit of a lad can only help him. Can't it?

There was also talk of  how yesterday saw the most illegal immigrants cross  the English Channel in a single day. I can't work out why people are surprised about this. For years migration from the war zones in Africa and the Middle East were a European problem in which twenty-seven countries dealt with the issue. Nowadays the European Union isn't where the migrants want to be; it is somewhere that the migrants pass through, and the remaining twenty-six EU countries are happy to see them go. So much so that yesterday a French warship escorted a boatful of migrants to the British mainland.

Apparently the UK and French governments struck a deal last November to tackle illegal Channel crossings but details of that deal remain sketchy as the French authorities have so far resisted the idea of having dinghies sent back to their northern beaches.

Of course they have. Why are people acting surprised about this?

Pausing only briefly to hit a pigeon as it tried to fly under my car's front wheels, I got to work and told everyone of  the chap I'd seen outside the window yesterday doing his odd exercises. The consensus of opinion was that the chap was actually doing a "Primal Movement Workout"; some new thing (originally from Australia) in which you have a keep-fit routine based on movements that you tend to do naturally in daily life anyway rather than just for the sake of doing exercise. Apparently sit-ups and press-ups aren't natural, but crawling round like a tiger and fighting a tree are.

One lives and learns…
Posted by Manky Badger at 9:38 pm