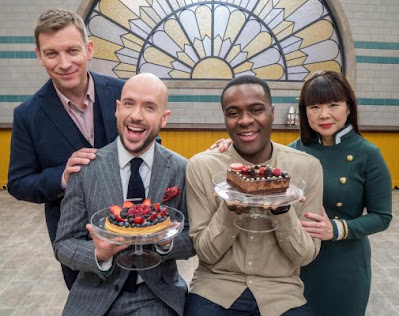 Finding myself at something of a loose end as to what to watch whilst I scoffed toast, I put on the first episode of "Chewing Gum" and stared at it as yet another negative COVID test incubated. As I logged that negative result I had a quick look at the Munzee map. I'd got up early this morning to go on a little Munzee mission to scan a certain type of bar-code needed for our current clan war, but overnight someone else had scanned all that needed scanning. So... with no need to have been up anywhere near as early as I had been I watched another episode of "Chewing Gum" in which our heroine (like all TV show heroines) "did the dirty deed" whilst keeping her pants on. At least she had the good grace to have a nose bleed whenever she did anything un-moral; she felt un-morality was rather stressful.

With time on my hands I stopped off in Goudhurst on my way to work. I had a plan that I might set up my geocaching Adventure Lab there. My idea was to create a guided tour of the village based on those blue circular plaques that you find on old houses where the famous once lived. Goudhurst is a pretty village; a walk round there would be just the thing... Or it would have been *if* there were any of those blue circular plaques that you find on the houses. I couldn't see any. I asked a passing local who told me that she'd never seen any of them in Goudhurst. The closest ones were in Cranbrook five miles away. So much for that plan...

As I was passing I popped in to the local bakery; the Belgian buns looked nice. The local thugs getting their sandwiches didn't, but you can't blame the shop for the sort of thug it attracts. And then as I walked back to my car so my idiot magnet turned itself on. A passing dog walker asked if I knew her dog. I said that I didn't. She told me that her dog certainly knew me - she could tell from the way the dog was looking at me. I fussed the dog, and the woman took this as a tacit admission that I *did* know her dog. I tried to explain that I fuss all dogs, but she wasn't having any of it. If I didn't know her dog, why was I talking to him?

Doesn't everyone talk to every dog they meet?

As I then drove on to work the pundits on the radio were talking about how Members of Parliament are calling for a register of all children  who are undergoing home schooling rather than being educated at a proper school.

It was claimed that there is no formal record of which children are in state schools, which are in private schools, which are being educated at home, and which are running feral. Those wanting some documentation of what the children are doing said that some families in England face being forced into home schooling their children (partly) due to a lack of support for children with special educational needs and disabilities. That's probably true - Swadelands School in Lenham forced us to home-school “Daddy’s Little Angel TM” for the end of her last school year because they couldn't cope with her "challenging" behaviour, and that wasn't a success.

There was some odd woman from the Home Schooling Association being interviewed on the matter. She was dead against any register of home-schooling, was rather aggressive toward everything asked of her and sounded as though she was about to burst into tears at any moment. Failing to address any of the points put to her, she just demanded that home schooling was by far the best way to educate a child whilst offering no evidence to support this (at all).

Personally I have major reservations about home schooling. You need a variety of experts to educate a child. If I had to, I could (probably) teach maths and science, but that would be all. I'd need someone else to teach history and languages and geography and stuff like that. I don't doubt home schooling could be done well, but it would take some doing.  But then,  that's why we have schools, isn't it?

Of the children I know who were home schooled, one's education consisted of playing tennis and reading wikipedia, and another got to the age of seventeen and still couldn't read.

I got to work, made myself a cuppa and scoffed that Belgian bun I'd bought in Goudhurst. Over the years I've become something of an expert in Belgian buns and this one was perhaps the worst one I have ever had. It certainly wasn't baked today, and I would be very surprised if it had been baked yesterday. If you were to type the word "stale" into Google you might well see a picture of that very bun.

It was shortly after this that I had a minor panic. I'd lost my swipe card. It wasn't in my pocket where it should have been. Realising that I'd needed it to get into work I must have lost it somewhere after the laboratory door. So I re-traced my steps to no avail. It wasn't in the tea-break room. It wasn't in (or down) the toilet. I hadn't (somehow) dropped it in any of the bins. Having re-traced my steps three times I eventually found it laying on the floor at the exact spot where I realised I'd lost it. Woops!

At tea break my phone beeped at me. Not only had that geocache I'd hidden yesterday gone live, it had been found too. Yesterday I put out a geocache not far from Goudhurst church. To find it you need to solve a simple puzzle based on the Battle of Goudhurst. I'd deliberately not mentioned it on here yesterday as there are those who follow this diary in the hope of getting hints to new geocaches that I might hide, and then go out to find them before they are released for everyone to find.