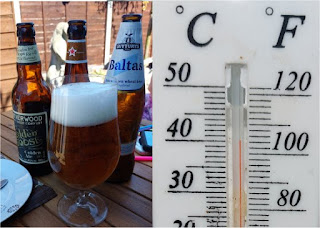 I slept for nine hours last night. That was something of a result. I came downstairs, and as I made brekkie I saw that the warning light on the smart meter was yellow. The thing has three lights warning us of power usage. Green is good. Amber is getting a tad keen. Red is “Turn stuff off. Now!” At the time I noticed the amber light we had two fridges, a freezer, two digital clocks, the fish tank and the pond filter going as well as the kettle and toaster making my brekkie. When the kettle and toaster finished, so the smart meter went green. I wondered if it was seriously telling me that we really shouldn’t be using any more power than the bare minimum? I’ve already been into its settings once to increase what it thinks is our power budget to what we actually spend. But after a little while spent playing silly beggars it would seem that the smart meter has a serious aversion to the electric kettle.
Does anyone else have a smart meter that doesn’t like their kettle?

I peered into the internet as I scoffed toast (my lap-top not sending the smart meter back into amber). I was immediately presented with memories of a walk round Swanley this time last year. I smiled as I remembered, and sulked a little as we didn’t have a walk planned for today. With much of our party in ten-day isolation we’d cancelled, and it was as well that we had. Today was forecast to be the hottest day of the year, and black dogs don’t do well in bright sunshine.

With temperatures far too hot we sat in the garden (in what shade we could find). I took the opportunity to carry on reading my current e-book. Whitten by Liu Cixin (billed as China’s answer to Arthur C Clark) it explores the Fermi Paradox. For those of my loyal readers who’ve not heard of it, the Fermi Paradox is one of the biggest unanswered questions. Knowing what we do about our own planet and knowing what we do of others (from all sorts of space probes and telescopes) we can make a fair guess of how many alien species there are in our galaxy. Although there are a lot of variables to be considered, in theory there should be a *lot* of alien civilisations in our galaxy. *In theory.* In practice we’ve not seen any aliens.

One particularly worrying explanation is the “Dark Forest Hypothesis”. Put simply with life seeming to be constantly expanding (look at humanity) but with very limited resources (look at the state of our environment), someone else’s resources are a very valuable commodity. Leaving the aliens alone gives you nothing. Talking what they’ve got gives you loads… Invasion by aliens is a joke… right?

Or is it a risk best not taken? It makes sense not to let aliens know where you are.

In my e-book one of the leading characters sends a message of friendship to Alpha Centauri and ends up wishing she hadn’t.

As I read my e-book I had a bottle of wheat beer. Then a bottle of Hobgoblin Gold. Then a bottle of Golden Goose. Then I went into the living room and had a little lay down. After a couple of minutes Pogo joined me and we both dozed on the sofa for three hours.

The plan had been to walk the dogs in the evening when it was cooler, but it was still twenty-six degrees at six o’clock, and doth dogs were listless and hot and bothered.

“er indoors TM” boiled up a rather good dinner which we scoffed whilst watching the last episode of “Ade in Britain”. I wonder what we will watch next.

“er indoors TM” then tuned in to the Sunday zoom meet in which absolutely nothing at all happened.

Having been at work for large parts of the last six days and planning to be at work for the next five days, today was my only day off. It was pretty much wasted. I shall blame that on the excessive heat. It had been billed as the hottest day of the year…