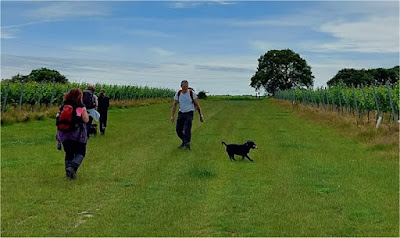 I looked at the last portion of the left-over Chinese as I farted like a thing possessed, and decided that it might be a more prudent move to give that stuff a miss and stick with toast for brekkie.

I set another negative COVID test incubating and as Treacle tried to eat it I had a little look at the Internet.

This morning Facebook seemed to be flooded out with posts from teachers who were crowing about the start of their summer holidays. Do they *really* have two months of summer holiday?

There was also quite a bit of talk about Bradley Walsh. Having been a part of the team which put the final nail in the coffin of “Doctor Who”, he’s apparently caused uproar with his herbal product “Gaias Choice CBD Gummies” a herbal medicine for supposedly every ailment known to science, Does his “Gaias Choice CBD Gummies” stuff work? Like all of these herbal remedy bolloxes, the answer is yes and no. There *is* an active ingredient in the stuff which has health-giving properties, but the amount of this stuff varies from batch to batch. Does that matter? – Go to Hastings Old Town. Go to a pub in the High Street called the First In Last Out and have a pint of their Ginger Tom (home made ginger beer). Go back a fortnight later and have another. You will find they taste utterly different as no two batches get the same amount of ginger in them. This is what is wrong with all of these herbal (so-called) medicines. The amount of the active ingredient varies massively from one batch to another. That’s why when a doctor prescribes a proper medicine, a pharmacist makes sure you get the right amount. Not too much and not too little.

We got ourselves and the dogs organised, and set off to Appledore. A few months ago a new series of geocaches went live replacing the series which had been archived. Those ones first appeared on 23 October 2013 when I got First to Find on most of them. I can remember that being a very good walk, and together with Karl, Tracey and Charlotte we walked the route again. I say “walked the route again”; it has been extended from what I remember.

We almost fell at the first hurdle when the village car park was closed, but it wasn’t long before the cars were parked somewhere else and we were on the way. We walked through the rather pretty village of Appledore, along a footpath alongside the canal up to Kenardington church, and cross-country through the vineyards back to Appledore. Despite the recent heavy rain the walk wasn’t muddy, and the long grass wasn’t wet. The walk was mostly on flat ground; some of it must have been up hill as there was quite the down hill slope towards the end.

As we walked we met quite a few normal people out and about. One took great exception to a huge pile of rubbish that had been fly-tipped not far from where we’d stopped to have a picnic. Someone had obviously taken the contents of their shed and dumped it in a hedge near Kenardington church. I agreed with the chap – why on Earth do people bring lorry loads of rubbish into the countryside just to fling it into a hedge? But from the way he was ranting I formed the distinct impression that he felt we were responsible for the fly tipping.

It was shortly after this that I and both dogs got rather bogged down in some rather foul slurry. Yuk. But despite that, we had a good walk - I took quite a few photos. It was only a shame that I did for my knee when nearly going arse over tit when not looking where I was going at a kissing gate.

Geocache-wise it was a good series. I must admit that personally I would have put out some larger pots, but that’s very much a personal thing. The GPS co-ordinates were good, hints were helpful, and there were a range of hides. Some straightforward; some not. We found all but one of our targets; the one we didn’t find was a four-stage puzzle based in the churchyard, and we were going past just as the righteous were all getting ready to suck up to God. Having five of us (and two dogs) rooting round the churchyard would have looked a tad suspicious.

After nearly seven miles we got back to the cars where we said our goodbyes and came home. There was an intense scrubbing of foul-smelling slurry from dogs, gaiters and boots, then “er indoors TM” took Pogo off for a little holiday with his mummy. After all, Pogo is “Daddy’s Little Angel TM”’s dog.

On her return “er indoors TM” boiled up a rather good bit of dinner and then we watched the football cup final of whatever cup it was that has been going on for the last few weeks (it wasn’t my idea!).

Seriously - what is the attraction of football? It really did seem incredibly repetitive with the players just hoofing the ball from one to another. Occasionally one or another would make great show of being hurt, then would leap up and carry on proving there had been nothing wrong with them.

After what must have been the most tedious hour and a half of my life the match was a draw and an extra half hour was added to the duration of the thing. That achieved nothing, and it was all decided by a penalty shoot-out. Why couldn’t they have done that at the start and saved us all an excruciatingly dull two hours.

After weeks of being told “it’s coming home” it would seem it isn’t.