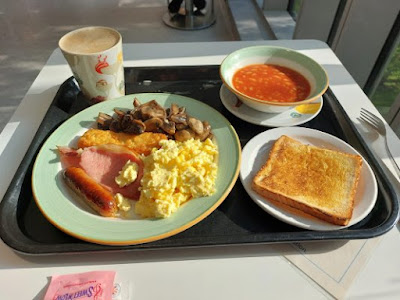 After a night wracked with nightmares of trying to stop “er indoors TM” joyriding twocked cars round the local car parks I woke feeling like death warmed up. I made brekkie and watched another episode of "Fresh Meat" in which our heroes were again "doing the dirty deed" with their pants still on. One of them then stood for election for the position of president of the student's union with the single policy of cheap chips for all. This was very much a vote-winning policy and would probably sway much of the country's electorate at the next General Election.
I'd vote for cheap chips.

Leaving everyone else asleep I set off for work. I was rather amazed by the pundits on the radio this morning. Not for what they'd said, but for what they hadn't. Last night the long-awaited interview Dominic Cummings had been broadcast.

Having been one of the leading lights in the "Vote Leave" campaign during the Brexit referendum the chap now openly admitted that he felt Brexit had possibly been a mistake. He also spoke at great length about how he had been instrumental in Boris Johnson's rise to power, and also about how he and various others (as yet anonymous) had spoken about removing Boris Johnson from office as he wasn't up to the job. During an hour's interview this chap implied (many times) the existence of a shadowy cabal (of which he was a part) who exert puppet-master control of the country. Is this sour grapes from someone who was sacked, the fictional ramblings of a deranged mind, or something we should be rather worried about? Mind you Dominic Cummings did say (several times) that the electorate aren't able to understand that which they are voting for... he's got a point there. I've ranted about this many times in the past. Is having a shadowy cabal running the show (rather than a government appointed by a public wanting cheap chips) such a bad thing?

There was however a lot of talk about how the UK Government wants to overhaul the Northern Ireland Protocol. Right from the outset of the Brexit negotiations it was clear that the position of Northern Ireland was going to be problematical.

The head honcho of Marks and Spencer has already said that their Christmas lines in stores in Northern Ireland will be but a shadow of what they usually are.

Car dealers in Northern Ireland are finding it cheaper to source used cars from Japan rather than Mainland Britain.

Something's got to give. I suspect that which will be given will be Northern Ireland itself; being handed back to the Republic of Ireland before very much longer.

There was also talk about the Animal Welfare (Sentience) Bill introduced in Parliament a few weeks ago.

Everyone knows that dogs and cats are sentient. Just look at them. They clearly have feelings. You can tell when they are happy or sad. You could see from his expression just how much Fudge liked cheese, and he *definitely* used to sulk when he didn't get his own way or when I (incredibly rarely) told him off. But according to the legislation, all vertebrate animals will be recognised as sentient beings for the first time in UK law. This has quite a few implications... Obviously this will improve the lives of farm animals but many animals are farmed purely for their meat. Can we legally eat a sentient creature? Personally I can *if* is is bred for that reason, has not been mistreated and has been killed in a humane way. But if we can't scoff them any more, then cows and sheep and pigs will vanish from the fields. Only those who can afford a very expensive pet them will breed them.

And fishing for sport... that will be a thing of the past.

I stopped off at Tesco on the way to work. There were two Qrewzees in the car park this morning. There aren't any more (it's a Munzee thing). I then went shopping. I put on my face mask mainly because that is what everyone else was doing, and I didn't want to be on the receiving end of the tutting and glares that most of the masked shoppers were pointedly giving the one unmasked shopper.

I'd left home early to give me time for Qrewzees and Tesco. Together the two took me five minutes so I got to work half an hour earlier than I had planned to. And so whenever this happens I use the time productively and constructively. I went to the works canteen for a bit of second brekkie. Second brekkie was good.

Suitably replete I got on with work. The boss had spent good money on an Olympus DP23 camera which (once hooked up to a microscope) I rather monopolised for the day. After forty years I still like taking photos of things far too small to see without serious magnification.