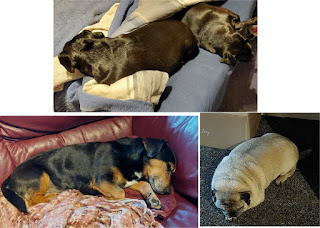 I was woken just before eight o’clock by the sound of people outside who were raising the roof. Quite literally raising the roof. We’ve had the bathroom roof replaced today; those doing the replacing wanted an early start and were happy to get going before we woke up. Despite the noise of the roof being taken off, all four dogs slept blissfully, and were still fast asleep an hour later despite the ongoing racket.

If the shop up the road gets a customer, they all go berserk, but people can come into the garden, set up ladders, and take the roof off of the house and they don’t care…

I made toast and peered into the Internet. There was a row kicking off on Facebook about dogs on leads. Someone who won’t let his dog off of a lead felt that his dog couldn’t be trusted off of a lead, and didn’t want any other dogs to come anywhere hear his dog. Apparently he’d got into arguments with walkers of non-leaded dogs. Probably not me (this time), but I wondered why he didn’t give his dog a chance off of the lead. Ten minutes of whistle training will install a recall ability, and there are plenty of places to go where the dog can run with no other dogs about. Or why not have the dog wear something yellow? I thought about commenting, but decided against it.

There was also an argument about cosplay. Someone who had dressed up as a villain from “Scooby Doo” was being accused of racism. Scooby Doo”? – some people just want to argue.

I turned off the lap-top and made the builders a cuppa, then drove down to Hastings for a morning checking in with Dad. He seemed OK – he’s got a bit chattier since Mum’s gone, but I suppose he’s had to. He was talking about replacing fence panels. Fences seem to be a “thing” in our family.

Talking of which I came home via AVS fencing. My Ham Street Lover has started working there, and the place has all sorts of fence paints and post toppers and can get me shingle and patio slabs. I took out a few catalogues, and came home to find the bathroom roof looking good.

er indoors TM” and I took the dogs round the co-op field. It was cold and drizzly. And with dogs walked I took myself off to bed for the afternoon. I didn’t think I slept well, but I wasn’t woken by the sound of Dad ringing me.

I eventually got up to find the roof had been finished a couple of hours before. I don’t know the first thing about roofs, but it looks a lot better than it was. The rough wood edge has been replaced with a much tidier plastic edge, and there is no gaping hole in the felt any more.

I’m hoping that er indoors TM” will come up with some dinner in a bit, then I’m off to the night shift…