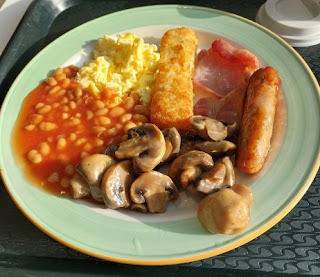 Having trodden in one of Sid's turds yesterday I was pleased to find the house was a dung-free zone when I got up this morning. I made brekkie and scoffed it whilst watching an episode of "Superstore" which didn't really work. The show is set in a supermarket with a cast of characters who have developed over time - taking all the characters into a different environment and having them behave utterly unlike how they usually do wasn't a good move by the writers.

I had a quick look at the Internet. Facebook was dull, but I had a couple of emails.

The ombudsman have formally reviewed the aggro I had with the power company over the last few months. They said that whilst the smart meter wasn’t sending results to the power company, this isn’t uncommon, and they (amazingly) felt that it was quite acceptable for the thing not to be fit for purpose. But they did say that the power company had taken far too long to sort themselves out, and they agreed I could get cheaper leccie and gas elsewhere. They’ve told the power company to write me a letter saying how sorry they are and to give me a fifty quid bung. That’ll cover the exit fee so I can go to another supplier.

And the pet insurance has stumped up for Fudge’s first bout of pancreatitis that he had in February. Claiming to settle all claims within ten working days it only took them seven weeks to do this, but that is eight hundred and fifty quid for which I am very grateful.  Let’s just hope they stump up for the one thousand two hundred quid bill we ran up last week.

Feeling rather chuffed at two (not so minor) victories I set off for work far earlier than I usually do. Overnight the bit of road outside my house had re-opened, but my car was still parked four streets away. As I walked to it I deployed resellers (it's a Munzee thing), and it wasn't *that* long before I was on my way. The traffic lights were still in place in High Halden, but I sailed through those. The road that was closed at Biddenden last night had re-opened, but on seeing the amount of traffic infesting the A21 at the Lamberhurst roundabout, I took a little diversion through Matfield and Colts Hill to get to work.

As I drove I listened to the radio as I do. There was brief mention about a vaccine against malaria, but only a very brief mention. When you think that malaria has killed more people than anything else in the history of humanity (it really has - look it up!) you might think that this would be headline news. Am I being cynical in thinking that this isn't more newsworthy because it is the poorest people who suffer from malaria, and those of us with money have other things to worry about?

I found myself thinking about the announcement that the Royal Family have now finished their official two weeks of mourning following the death of Prince Philip.  I'm still missing my mum two months after she went, and does this mean I only have a week left in which to cry for my dog? (I think I might need a little longer for both).

I'd left home early expecting the roads to be bad; I got to work in better time than I had expected, so I popped to the works canteen to get the brekkie. It wasn't bad I suppose, but it gave me a stomach ache which lasted much of the day.

Work was work; I came home and spent much of the evening fast asleep in front of the telly. I get so cross when I do that…