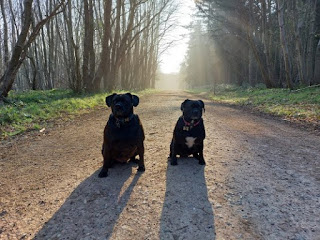 I woke up far earlier than I needed to have done, so once I’d scoffed toast and watched an episode of “Superstore” I got dressed and shouted “Who wants to come for a walk?” There’s no denying that I’d not been looking forward to the first half-way decent walk without Fudge, but it went well. And much as I miss my dog, there’s also no denying we got round far faster without him slowing us down. It was never that his legs were too short and he couldn’t keep up. He could if he wanted to; he just never wanted to. There were always far more interesting things to sniff at under bushes, holes to dig, squirrels to chase. Much as Treacle and Pogo sniff, dig and chase, they are far more people-centred. They can’t bear to be away from us whereas Fudge was *incredibly* independent and wilful.

We went up to Kings Wood… or what is left of it. Since we were last at the lower part there has been a tremendous amount of forestry work and tree felling going on. We met a couple of other dog walkers. One chap had his dog still on the lead a mile into the woods. Why take the dog to the woods if you won’t let them run. (Pogo learned to come back to the sound of the whistle in minutes). Meeting the other chap was something of an embarrassment. From some distance he called to ask if my dogs were friendly. Of course they are friendly… and then I looked at them. As they were running so Treacle had Pogo’s leg in her mouth in a grip of iron and was snarling. Well – I know that they are always doing this, but I suppose it might look off-putting to the normal people.

As we walked we saw a pile of horse poo. Pogo and Treacle sprinted to it and ate as much as they could, all the time staring at me as I ran straight at them. When I got close enough to them to grab them, so they ran away from the horse poo. Foul creatures. My Fudge would *never* have eaten horse poo. To be fair he would most definitely have rolled in it, but eaten it? Never.

We’d gone to Kings Wood to replace a missing geocache. I’d had reports that a few of the geocaches I’d hidden there had gone missing; yesterday someone walked the entire series and found all but one of them. I replaced that one today.

Replacing missing geocaches can be something of a sore point. The rules say that replacing them is the responsibility of the person who hid it in the first place. Which it is. However when we are going out hunting Tupperware it takes two seconds to glance at GSAK (it’s a geo-thing) to see if there are any potentially missing caches where we are going walking. It then takes about twenty seconds to send a message to the person who hid the thing to ask if they would like us to replace the missing cache. And then when we are at where the thing is supposed to be, if we can’t find it after a concerted search, it takes about ten seconds to pop out a replacement. So – for me to help someone else takes less than a minute. But when I am replacing my own missing ones it can take anything up to half a day depending on exactly where I have to go to sort the problem.

Fortunately I have dogs to walk, so I’ve hidden caches along routes which make for good dog walks, but what with one thing and another, getting out to do cache maintenance has been rather difficult lately.

With walk walked we came home and I tried out the instructions the nice lady had given me for making the final insurance claim for the bill we ran up with Fudge last week.

Having started logging in to the insurance portal the thing then emailed me a six-digit code to prove to the portal that it really was me. The portal didn’t accept the first two codes. Then the lap-top asked if I wanted to accept cookies on pretty much every key stroke that I made. What could have been a two-minutes job seemed to take an age.

With that (finally) done I set about my CPD folder and wrote up that which was worth writing up. You can see what I wrote here. I’m amazed at how many people do look at that.

I took myself off to bed for the afternoon where I slept for a couple of hours and lay awake restless for another. Hopefully er indoors TM” will boil up some dinner, and then I’m off to a night shift that (quite frankly) I don’t want to do…