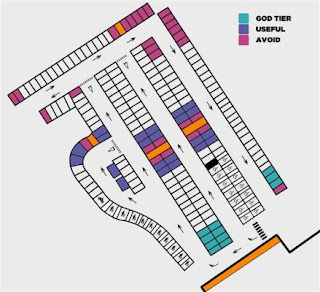 I woke with backache at half past four, and couldn’t settle. After an hour or so I gave up trying to sleep, made brekkie and watched an episode of “Superstore”.

I did consider making a start on my planned garden project by getting a coat of ronseal onto the planks I bought yesterday, but my back was still playing up so I sparked up my lap-top instead.

The internet was much the same as ever. Some chap had posted to may of the local Facebook groups plugging his political party who seem to be promising to make the Romney Marsh a growth area. Others were slagging the chap off purely because he was supporting a different political party to their favourite one. No one was disagreeing with policy, everyone was disagreeing with the colour of the rosette being worn by the candidate.

I am reminded of an old workmate who wouldn’t hear a word against the Conservative party ever since her father once told her she was a “true blue”. I often cite her as a total failure of the democratic process. She didn’t agree with a single policy of the Conservative party, she regularly got *very* angry and insulted when she was told that what she thought were good ideas were actually Labour party policy (it was!), and she spent years bitterly complaining about the very government she voted in.

As I drove to work the pundits on the radio were talking about some chap who has spent six years achieving his ambition of parking in each of the two hundred and eleven spaces of the car park at his local branch of Sainsbury's. Those long winter evenings must just fly by for that fellow.

Needless to say today was a rather quiet day on the news front…. Or I am assuming it was. After the news of the cark park chap was the sports news. I really did hear a repetitive drone of “blah blah sport, blah blah sport” and I didn’t pay any more attention to the radio for the rest of the drive.

Work was work; I came home and whilst er indoors TM” took Pogo and Treacle for a walk, I led Sid on a bimble round the block. We didn’t go far, and it tired him out. So much so that when we came home he went straight to his basket and flatly refused to come into the garden with me. I spent a few minutes getting that first coat of ronseal onto the planks I bought yesterday and gave myself another backache. And then my piss boiled when I came inside and saw that Sid had crapped all over the lino. Next time he is coming out with me whether he likes it or not.

er indoors TM” boiled up a very good bit of dinner which we washed down with a massively overpriced bottle of plonk whilst we watched the latest episode of Lego Masters USA. Not a bad way to spend the evening…