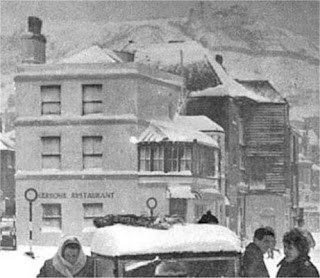 Fudge didn’t move about in the night; he stayed where he was settled. When I got up he was quivering. Not shivering, but quivering. I fussed him for a bit, and once he was fast asleep I left him there and went about my morning.

Bearing in mind my failure with Sid yesterday I had a concerted check for turds this morning but found none. Mind you I found none yesterday either. Using the last of the jam I made some toast and scoffed it whilst watching an episode of “Superstore” then peered into the depths of the Internet. Three friends had birthdays today; I sent out birthday wishes as I do. Mind you I was rather disappointed to see that none were work colleagues – no excuse for cake. But other than birthday notifications, there was absolutely nothing else at all happening on Facebook. And with no emails at all (not even spam) I quietly got ready for work.

As I wandered up the road to my car I saw that what was once an ironmongery shop is to re-open as a barber's shop. That will make three hairdressers within two hundred yards of home. It would seem that getting a haircut is something of a growth industry? I wouldn't know - I've got a pair of shears and have been doing my own haircuts for  years.

I scraped the ice from the car's windscreen and set off to work listening to someone or other from the Scottish Green Party banging on about the importance of Scottish independence. Really? How is it that the same people who advocate independence from the United Kingdom also want to re-join the European Union. Is there some contradiction here, or is this just the Scots natural hatred of the English at play? I can't help but feel that the time for petty nationalism is long past, and the sooner we have one world government with everyone pulling together, the better. But what do I know?

There was also an interview with Lord Sebastian Coe about the Olympic Games supposedly taking place in Japan in a few months' time. Even though Japan is in the grip of a fourth wave of the COVID pandemic and less than one per cent of the Japanese population have been vaccinated.

Lord Coe seemed confident the games would go ahead. Apparently people watching on the telly wouldn't notice any difference  as the COVID precautions wouldn't affect the competition.

I suppose they won't televise all the people dropping dead?

I got to work; I did my bit. During breaks I was reading an old favourite book (e-book) “Brideshead Revisited” in which someone looks back on part of their life. Was it this that made me think about my days in the Harbour Restaurant in Hastings. Nowadays it is the “Old Town Frier” fish and chip shop. Apparently it was a pub until 1913. I could only find one entry about the Harbour Restaurant itself on-line though, and that didn’t say much. I worked there during the summers of 1980 and 1981, and was wondering whatever happened to the people with whom I worked. The wife of the owner (an incredibly fat lady known to all and sundry as “Misses”) would seem to have died three years ago. The (so-called) head chef would seem to have been buried by Hastings council two years ago. But whatever happened to my mate Kev who got me the job there in the first place. Or Lisa who was dating the school hard man? Or Carol (who terrified me)? Or Joyce (who won the Sun bingo)? Or “Dustman’s Daughter” whose father emptied the restaurant’s dustbins? Or Anita? Or Willy? Or Mr Gustav? Or “Boss”?

There were so many people who worked there – and so many memories.

With work done I drove to the vet to collect Fudge (who had had another day in dog hospital). I saw one of the vets that I usually see. He was rather dubious about what progress my dog might have made today; the trouble being that Fudge makes no secret that he doesn’t like to be at the vets and he sulks. We are to keep an eye on his general demeanour overnight and go back for blood tests in the morning.

Fudge did his business when we got home, then I cuddled him up on the sofa next to me where he stayed for the entire evening. What I find most upsetting is how Treacle keeps licking his nose and looking at me as though she expects me to fix him.