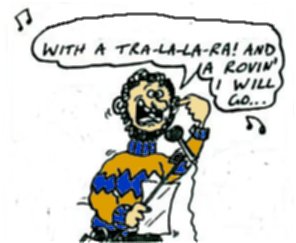 Yesterday had been rather traumatic and I had an early night. I slept for eight hours, waking a few minutes before the alarm went off. I made toast, watched an episode of “Superstore” then had a look at the Internet. So many people had sent me kind wishes about Fudge’s passing yesterday.
I had a friend request on Facebook from Hillary Sparks; she seemed to be incredibly friendly and very keen to waggle her jugs about. I reported her to the Facebook feds for having done so – someone has to take a moral stance. I doubt the Facebook Feds will do anything about her; they rarely do anything about anyone.
There was a row kicking off on Facebook about the most recent load of flats which have started to be built locally overlooking Viccie Park. Some people were claiming that they were cheap… Compared to many other flats they probably are, but are still beyond the price range of most people. I blame Margaret Thatcher under whose leadership houses (and flats) stopped being places to live and became financial investments.
And a physicist has apparently worked out why we haven’t met aliens yet. I can’t help but think that a big “Well Done!!” is due to this physicist who had come up with an idea which was old when I was born.

It was rather cold as I walked to my car, but the windscreen just had condensation on it; not ice. I turned on the wipers to clear the condensation, and it froze. So I spent a couple of minutes scraping the ice anyway.
As I drove to work the pundits on the radio were broadcasting something which I can only describe as pure unadulterated crap. There was a feature on folk songs about convicts who had been deported (to various prison colonies) a few hundred years ago. It truly was that bad that I found myself listening to it in utter disbelief. Not only have some people kept these frankly f...-awful dirges going, someone else feels they warrant half an hour on national radio. I really was tempted to put my foot through the radio and send the bill to the BBC.

This was followed by the farming half-hour in which various farmers were brought on to which about what an utter train-wreck Brexit had proved to be for them personally, and had they known what would happen then they wouldn't have voted for it in the first place. Now I can hardly claim to be impartial on the matter, but there must be *some* good that has come out of Brexit. There must be something positive about it? But there is never anything mentioned on the radio.

I turned the radio off, and sang along to my (some say bizarre) choice of music as I drove through a rather bright morning.

I got to work rather earlier than I would have liked. I was on time, but an early start in Tunbridge Wells means an early start (full stop!) I had hoped that the trainee would have done all the work today, and then I could have spent the shift sitting in a corner crying pathetically. But my plan fell at the first hurdle when the trainee told me that (being a trainee) he was still in training and I had to do the work. That was probably for the best; a busy shift kept me distracted, but I was still thinking of my dog at least once every ten minutes.

I came home to find “Daddy’s Little Angel TM” and “Stormageddon – Bringer of Destruction TM”  in residence. Having raided the KFC they were watching “Apple and Onion” on the Cartoon Network. They then went off to a mate’s garden where there was a marshmallow toasting going on.

er indoors TM” then tuned in to her family’s Zoom reunion. Aunts and cousins from round the world were pontificating about the Duke of Edinburgh’s funeral and COVID regulations in their neck of the woods. For me the highlight of the meeting was finding out that Maureen has had an operation and had all the lymph nodes in her armpit removed, and that some other (anonymous) relative has grown a tomato plant.
I wonder if these meetings will become a “thing”. I’m not sure my nerves could take it if they do…