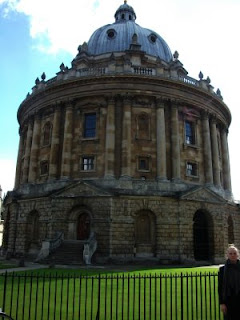 Being up far earlier than I needed to be I set the washing machine loose on a job lot of white stuff, then sorted myself a bowl of granola which I scoffed whilst watching an episode of “Superstore” before sparking up the lap-top. As it sparked up I recognised the photo on the Windows start-up screen – it was the Radcliffe Camera in Oxford. I’ve been there. With Windows showing me various scenes from around the world, in the five years that I’ve had the lap-top, this is the second time it has shown me a picture of somewhere that I’ve been. The other place was Buchart Gardens on Vancouver Island.

Pretty much nothing at all had happened overnight, and with no emails at all I deployed a Munzee, hung out the washing and got ready for work.

I was rather glad to see that (unlike yesterday morning) there was no ice on my car as I set off to work. As I drove the pundits on the radio were talking with one of the head honchos of an initiative which aims to clean up a million miles of coastline. This is an admirable project in which members of the public remove plastic waste from beaches. However the chap being interviewed was a bit vague about what we do with the plastic once we've got it off of the beach. Shove it in a hedge or chuck it over next-door's fence, perhaps? But what boiled my piss was when he said that we should all go out and clean up the mess because this would make the Government sit up and take notice and force them to do something themselves. Will it? Really? I was reminded of a public meeting I went to in Ashford a few years ago when a local councillor was talking about how  the council didn't need to clean up my road as it was always litter free. I agreed with the chap, but a very angry beetroot-red-faced chap went hysterical and screamed and ranted that our road was only litter-free because he went out every morning at five o'clock and gathered all the litter. He went apoplectic when it was pointed out that there was absolutely no need for the council to spend money on street cleaning as he was doing the job already.

Mind you when I say "a few years ago"; my diary shows me that this meeting was on 13 February 2008 - thirteen years ago back when I used to blog on Yahoo 360. Looking back, I enjoyed that meeting. In between stirring up the local racists and xenophobes, the beetroot-red-faced chap nearly had a stroke, and one of the local Police Community Support Officers started crying. Funnily enough there's never been a public meeting in our ward ever since.

I got to work and did my bit. And with bit done I came home. er indoors TM” was out with “Daddy’s Little Angel TM” and “Stormageddon – Bringer of Destruction TM”, so I walked the dogs, fed the pond fish, cleared the garden of dog dung, put on washing, fed the dogs, fed the tank fish, and took over an hour before I could slob about in front of the telly.

I worked harder in that hour than I did all day long at work…
Posted by Manky Badger at 9:58 pm