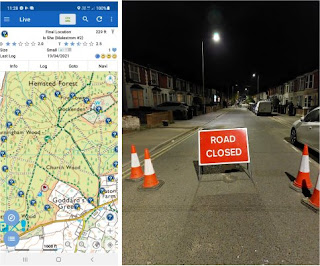 There has been a water leak over the road from our house. For the last year water has been dripping out of one of those little covers on the pavement. As we went to bed last night so a gang of workmen rolled up, closed the road and started drilling and digging. It wasn’t so much them that I found disturbing as new-next-door’s girlfriend shrieking about when would they shut up. I’m not sure when they did finally shut up, but they were done by the time that Treacle trod on my goolies at five o’clock.

I didn’t get back off to sleep after that.

Once I’d scoffed toast (and watched an episode of “Superstore”) I kicked er indoors TM” out of her pit and we took the dogs for a little walk. Last year Orlestone Woods was always a good place to walk, but over the winter it got really muddy. We went back today and the mud had pretty much dried up. We had a rather good walk; we did our usual circuit (but in reverse). And our usual circuit which used to take fifty minutes only took thirty-five minutes without having to be waiting for Fudge to keep up. I shall look at the map and see it we can’t extend our walk somewhat.

We came home; I popped to the corner shop to get lunch and some pastries for second brekkie, then (as my COVID test incubated and my phone updated) I peered at the Internet. Facebook was dull, which, although a shame, was probably for the best.

My email in-box had some messages in it:

The nice people at Credit Karma thought I might like to know that having run up such a massive vet bill had reduced my credit score by fifteen points. I wonder what will happen to that score when I pay off that bill next week.

The nice people at B&Q thanked me for buying various oddments from them a month ago, and wondered if I might like to write a review of them for their website. I didn’t like.

I wrote up some CPD, played some Candy Crush Saga until I got bored, then set off in the general direction of work.

I stopped off in Hemsted Forest – having had reports that a geocache of mine hidden there had gone missing I thought I’d better have a look-see. Being on a late shift in Tunbridge Wells meant it wouldn’t take too much of my time to sort it out.

I got to the car park, walked for a few hundred yards, and found the cache exactly where it was supposed to be…  As I went on to work I found myself in a queue of very slow-moving traffic. There were traffic lights on the A21 for absolutely no reason whatsoever. There was a hundred yard stretch of the road which was coned off for some inexplicable reason.

I went on to work, had a rather busy shift, and came home… or tried to. Twice I found myself suddenly confronted with “Road Closed” signs with no diversions signposted. You would think that the council would have sorted something out, wouldn’t you? Blindly blundering round dark country lanes in Biddenden didn’t do much for my nerves. And the other road closure is the bit right outside my house. I wonder what that is all about? Unlike last night there is absolutely nothing happening there at the moment…