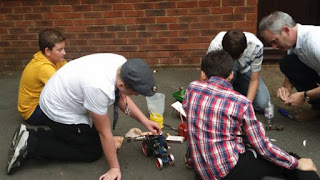 I made my way home after a surprisingly quiet night shift and was surprised to find I was driving home behind our nutty neighbour. What was she doing in Canterbury at 8am this morning? If we were on speaking terms I would ask her. He got home and I made a point of laughing at her attempt to park her car. She is an odd woman; she seems utterly unable to learn. She simply cannot park her car to save her life. When parallel parking she often has he car at (quite literally) right angles to the pavement. And her piano playing is abysmal. She has been playing the piano and parking her car for over ten years, and she is as bad at both today as on the first time she tried either.

I was rather pleased to see my little dog sitting on the back of the sofa when I got home. For all that he’s getting better he still is reluctant to jump. I’m taking his having jumped onto the back of the sofa to be a good sign. Mind you on seeing me he wouldn’t stop barking until we went for a walk.
We went round the park. As we walked I got talking with a Polish chap. He was casing the river to find a good fishing spot. I think that river would be difficult to fish; for him doubly so as he was using a sea fishing rod. (For those of my loyal readers who are not of a piscatorial bent, a river fishing rod is a gentle thing of elegance. A sea fishing rod looks like a broomstick with a rope tied to the end).
I’d forgotten about the Saturday jog-a-thon round the park but we seemed to have been early enough to miss most of it. As the joggers started we adjourned to the co-op field where we narrowly missed OrangeHead.

We came home to find next door was clanging her piano. I scoffed a bit of toast, then took myself off to bed for the morning. After a couple of hours I got up, we had cake and coffee then we took "Furry Face TM" out. "er indoors TM" had some geo-maintenance to do, and me and my dog came along for the ride. Whilst we were out we popped in to visit Cheryl and Lacey. Cheryl wasn’t happy – they’d been swimming at Ashford International Hotel’s pool. It was cheaper than the sports centre, they had the place to themselves, but they’d left in a hurry when they found a turd floating in the Jacuzzi.

"er indoors TM" boiled up a rather good bit of tea, then shoved off to the Saturday film night. I stayed home and polished walking boots and programmed “Hannah” whilst watching “Star Trek: Insurrection”. I’d not seen that film for a while, it was rather good. “Alien” is on now. I shall go to bed; that film frightens me…