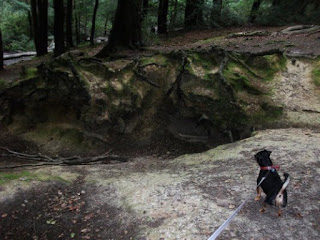 The aftermath of two night shifts is that I do sleep well. I woke to find "Furry Face TM" fast asleep on my bed. He looked comfortable so I left him be. Hence the expression “let sleeping dogs lie”.
Yesterday I mentioned my work-related blog. In total ninety-eight people looked at it on Sunday, and a further seventy-four yesterday. It seems popular. I might do more with it if my heart were in it…
I’ve had a message from one of the avid readers of that site asking how best to progress as a professional bloodologist. How should I respond? Like all jobs it’s not a bad one but being extremely specialised and with opportunities so few and far apart, unless you are prepared to up sticks and move half way across the country for a job it it is difficult to progress. And by the time you’ve made friends and settled somewhere who *really* wants to abandon everything for a job?

Over brekkie I had a look-see on-line. Apparently the end of the world is coming next summer. That will be nice. I remember the first “end of the world” that I lived through in 1980. It was something of a disappointment as have been all the subsequent ones.

We eventually persuaded "Furry Face TM" to eat some brekkie, then as "er indoors TM" went off to work me and my dog went for a walk. I’d been looking on the geo-map to find a short(ish) walk, but that map is quickly filling up with places I’ve been. But a few days ago I realised that with a little creativity and map-reading I could cobble a route starting at Bidborough church down into Southborough and back in a rather pissed circle. I’d posted on the local geocaching page to ask if anyone fancied a stroll. Most people were working today, but not everyone. I arrived at where we’d agreed to meet to find Dick rummaging in a hedge. Gordon and “Norton- scourge of rabbit-kind” soon arrived, and we set off for a little walk.

Bearing in mind we weren’t following a specific geo-trail but were effectively making it up as we went along we were rather dependent on the GPS units. There’s no denying they were all playing about somewhat today. I had a theory about a Tonbridge geo-magnetic anomaly. Everyone else had a theory about power cables and tree cover. But we navigated our route without too much difficulty
Mind you there was a *lot* of upping and downing involved, and it was a humid day; I was glad for the bottle of water I was carrying.
Geocache-wise it was an odd walk. Usually these geo-series are all put out by the same hider and you soon get into that person’s way of hiding Tupperware in the forest. Being a route we’d bodged together the caches were hidden by various different people. Some were in excellent repair. Some were in a right old state.
We got back to the cars having been out for three hours; “Hannah” said we’d been walking for two hours and stood still for one hour, and had covered a shade over five miles. That sounded about right.
I took a few photos as we walked. I do that sometimes…

Once home my little dog took himself off to his basket. It is easy to forget he’s not long out of dog hospital and he shouldn’t be overdoing it. Over a lunch of a stale cheese sandwich and Tizer (haute cuisine!) I watched last night’s episode of “Dark Matter”. It was very entertaining but I had no real idea what was going on. When the season ends (which it will soon) I shall watch the lot again from the boxed sets section of my SkyPlus box to see if I can make any sense out of it.

With a little time on my hands I then sorted out the Batcamp archive for 2006. My Batcamp archive is slowly coming together; I managed to find quote a few photos for this one.

"er indoors TM" boiled up a rather good omelette for dinner, and the clans gathered. We bandied a few insults, then watched an episode of “Supergirl”. Have you ever seen the show? It is quite good, but as super-heroes go, she is rather crap…