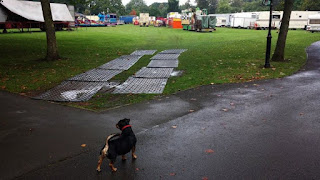 Last Friday I bought a jacket from "Go Outdoors"; I took it back to them last night. I was rather nervous about taking it back but they were brilliant - they didn't quibble at all. The nice man agreed that It should have lasted more than two hours and I was offered a replacement immediately. It was only a shame that they didn't have any more in my size so I was given a refund.
I got to work, did my bit, and came home again. I didn't really want to do the night shift last night but it wasn't that bad really. I like the time off work mid-week that the night shifts give me; I just don’t like doing the work.

I had planned to go out for a dog walk with "Daddy’s Little Angel TM" and "Stormageddon - Bringer of Destruction TM" this morning, but they had had a bad night so it was just me and "Furry Face TM". He was his usual troublesome self, causing mayhem as we went.
The funfair was setting up in the park as we walked. They come to the park a few times every year; I really should go to see it at some point. I’ve not been to a funfair in years.

Over a spot of brekkie I realised that I'd missed something. Yesterday was "Talk Like a Pirate Day". It was a fun thing once, but realistically it is now something which has had its day. A shame perhaps?
I then had a little look on social media. There have been a lot of memes circulating recently about ridding your life of the toxic people who bring you down. There were a few too many of those on my Facebook friends list so I thought I'd have a clear-out.  However the very moaning  minnies I'd decided to de-friend this morning had already de-friended me when I hadn't been paying attention.
I suppose that is no loss on either side.

I spent the rest of the day asleep despite my dog’s barking at every little thing, and I’m off to another night shift now.
The day between two night shifts is usually rather dull, and today was no exception...