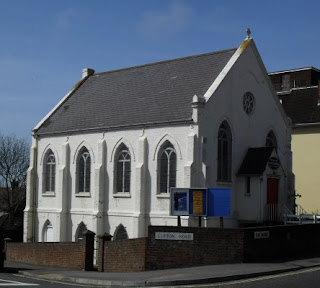 I had a rather busy night shift. I must admit I was looking forward to listening to the radio on the way home. For all that I’m hardly the most pious of heathens I do like listening to the church services on the radio on a Sunday morning. Sometimes… However today was not one of those days. Today’s service was a celebration of the Great Fire of London (why would anyone celebrate that?) and rather than having uplifting hymns they just had awful caterwauling and howling instead. Apparently such wailing passed for music in the seventeenth century.
Mind you talking of things ecclesiastical I see my old church is up for sale. When I was a lad I went to the Boys Brigade at St Helens Methodist in Hastings, and for a while I got quite wrapped up in that church. We got married there, the children got christened there… I’d heard it had closed. But to see it up for sale is rather sad. I can remember we had a rather major fundraising bash to rebuild the place some thirty-odd years ago. We raised tens of thousands of pounds (in the 1970s!)
I wonder if it is too late to get a refund?

I had planned to go to geo-camp for brekkie, but it would have added nearly an hour on to my drive, and if I’d gone I would have got chatting and involved in whatever was going on, and I’d already been up all night. So I was sensible and I came home. I stuck some whites into the washing machine, and over a spot of brekkie I had a look at the geo-map. I’ve sorted out a little walk for in the week. If any of my loyal readers would like to join in, you’d be very welcome. Especially if you know who Soter, Hyginus, Anacletus, Linus, Telephorus and Eleuterus are. The names feature in a puzzle and I’m pretty sure they were Popes.
With washing hung on the line I went to bed at 10am. I slept thought till shortly before 4.30pm.

I had a late brekkie, and wrestled with some geo-puzzles as I slowly woke up. Usually I wake raring to go, but I’m often a little groggy when I wake up at 4.30pm. I got the washing in, and "er indoors TM" and "Furry Face TM" came home from their adventures.

And I missed an anniversary – yesterday was five years since we first met my little dog…
I’m off to the night shift now.